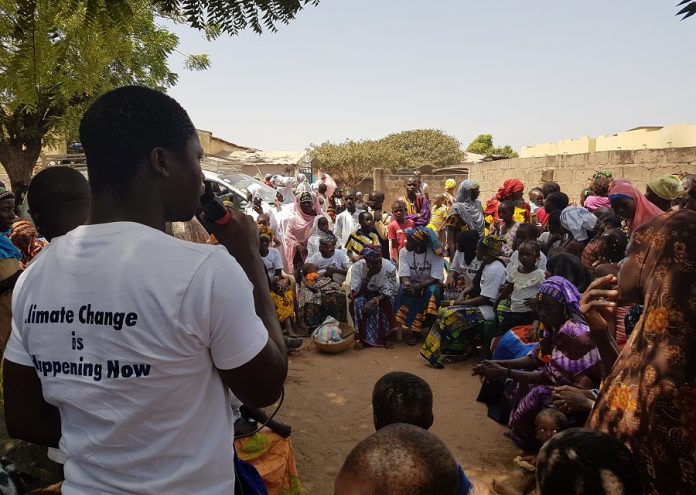 As part of its efforts to educate local communities on the effects of climate change, Beakanyang, a local NGO is embarking on a 6-day sensitization tour of communities in Wuli.

Speaking at the start of the tour, in Nyakoi Taibatou, Mr. Nfamara Jawneh, the Executive Director of Beakanyang said that climate change is real and communities including those in Wuli are also affected.

According to him, rainfall patterns have changed over the years with limited and unpredictable rains resulting in poor harvest by farmers.
According to him, communities in Wuli have been experiencing the effects of climate change such as flooding, extreme weather and erosion.

“If you could recall at the beginning of the rainy season last year several houses and animals were washed away by windstorm in many communities here in Nyakoi and in some communities we have in fact lost their loved ones during those disasters” he said.
He called on communities to desist from the indiscriminate cutting down of trees and to stop setting bush fires.

Jawneh calls for concerted efforts in preserving the environment while encouraging locals to plant more trees.

Mr. Fanding Barrow, a board member of Beakanyang thanked the Global Environment Facility Small Grant Programme for supporting the climate change sensitization tour.
According to him, the tour which includes traditional communicators locally known as Kanyellengs, climate experts, staff and board members will cover ten communities in Wuli East and West respectively.

For his part, Mr. Omar Malmo Sambou a lecturer from the University of the Gambia and a climate change expert told the communities that climate change is really happening and people need to take serious action to mitigate its impact.

According to him, climate change reports have shown that we will be experiencing increased temperatures while food production will also significantly reduce.
He told the people of Wuli to jealously guard their remaining forest cover while encouraging them to build a culture of tree planting.

Mr Sambo blamed the government for failing to effectively implement the environmental legislations and conventions and treaties the country had signed.
Meanwhile, from community to community, the Department of Forestry is alleged to be the biggest threat to our forest cover. Many communities blame foresters for issuing permits for tree felling by compromising the law and their responsibilities for personal gains.

Speaking earlier, Mbembanding Jabby, Alkalo of Taibatou commended Beakanyang for the tour noting that the impact of climate change can be reduced but required concerted efforts by all and sundry.

He expressed their readiness to work with Beakanyang in maintaining their community forest while calling for support to establish an ecotourism centre in the village.
The lady president of Bajonkoto Mrs Fatou Ceesay, and representative of the Alkalo of Sutukonding Mawdo Jatta hailed Beakanyang for enlightening communities on the effects of climate change.