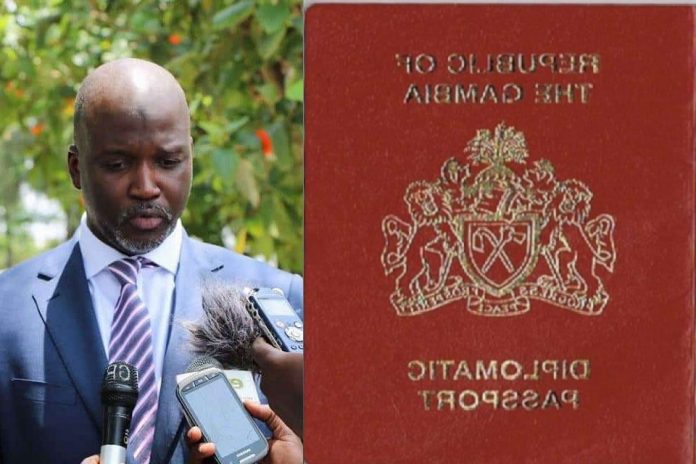 The Gambia has been abuzz with the scandal of a large number of individuals with diplomatic passports who have no need for this privileged document.

These include assorted individuals such as foreigners, as well as some officials of the Barrow Youth Movement (BYM).

Also featuring quite prominently are the relatives of the Attorney General and Minister of Justice, Mr. Tambadou, who successful requested diplomatic passports for his wife, mother, stepmother and two sisters.

Criminal proceedings may ensnare a few low-ranking individuals, and this is where the government is trying to divert our attention to. However, equally or more important are issues that are not related to law-breaking but rather expose improper behaviors that are morally or ethically dubious. It is important to clearly delineate these issues.

If certain individuals violated the law through forgeries or impersonated officials, they should face the consequences by all means.

What is also equally important for fruitful national discourse is the issue of officials misusing public resources even if a specific law does not prevent such activities.

This is where the issue of the Attorney General and the Minister of Justice comes in. A key question is whether it was appropriate for Mr. Tambadou to seek these privileges for his relatives.

In other words, does he have a compelling reason to seek these privileges for his family members for reasons that are essential for him to carry out his official responsibilities?
Let’s assess Mr. Tambadou’s own stated reasons for the need for the diplomatic passports.

He argued in his letter that he needed the diplomatic passports for the comfort of his relatives for their annual pilgrimage. This stated reason has nothing to with Mr.

Tambadou’s or any official discharging their duties more efficiently.

In other words, the basis on which he got these documents can be requested by any ordinary Gambian yet the vast majority of us do not have the privilege to access this document.

He simply requested a privilege due to his existing privilege as a key government official because no law explicitly prevents him from doing so.

A diplomatic passport for a spouse can be defended because there can be scenarios where a spouse needs to accompany a minister to an official function.

In such a case, it would make sense for both the Minister and the spouse to travel on diplomatic passports.

But to request diplomatic passports for relatives whose travels have nothing to do with official duties of the minister is to abuse a privilege.

While there may be nothing in the law to explicitly prohibit him from making a request for such a privilege, the absence of a statutory prohibition does not free an individual from the obligation to act responsibly.

In other words, we should expect our officials to consider themselves bound not only by the law, but also by ethics.

Rampant abuse of privileges should not be a new normal.

It is important to point out the key problems here but it is easy for people to be distracted by focusing too much on whether any laws were broken or hairsplitting on of a particular letter.

There is no denying that the president has the power to authorize the issuing of diplomatic passport, according to standard practice.

But just because the president has the power to do so does not preclude the official concerned from having the integrity in making sure his request is well justified.

It is also does not preclude the president from determining that a particular request is not well justified and inconsistent with the spirit of which those special privileges were created.

This saga also illuminates many troubling problems in the way this Barrow government operates. After all, it was not only Mr. Tambadou’s relatives who were issued diplomatic passports but many others such as the member of the BYM who should not have been.

It means established procedures for accessing and issuing these official documents are not respected. It also means that either there is no system of control to track and verify authorizations from the State House or that there is an abuse in the authorization itself.

This breakdown in process and procedures may nor may not be willful but it does not matter. After all, this very Barrow government made a big deal in 2017 of announcing that it was cancelling about 270 diplomatic passports that were wrongly issued by the Jammeh regime to individuals and their families. Yet this regime either is unwilling or unable to reform a broken system that it has long since recognized as a problem.

It is important to reiterate that this issue concerning the Attorney General is not separate from the issue of sale of passports as government officials would like us to believe.

Both issues are the direct result of a broken system on top of which sits President Barrow and Mr. Tambadou.

At the end of the day, the roles of a State House driver or that of junior officials at the Ministry of Foreign Affairs are only minor details.

The real responsibility lies at the top. Due to the hierarchy of the positions, the president’s responsibility is higher than that of the Attorney General but that does not absolve the latter. Yes, Mr. Tambadou “only” made a request and the president approved, but the former knows better than anyone what is a proper request and what is not.

After all, the attorney general is the chief legal advisor to the president.

If he is the source of ethically dubious behaviors rather than providing sound counsel to the president, he is unfit for the position he holds.

Ousman Gajigo is an economist. He has held positions with the African Development Bank, the UN, the World Bank and Columbia University. He holds a PhD in development economics.

He is currently an international consultant and also runs a farm in The Gambia.

By Suruwa B. Wawa Jaiteh While almost everybody is taking careful steps adjusting to the abnormalities of the American normal, the rest of our dear...
Read more
Opinions

Is President Adama Barrow another victim of dyslexia?

By Samsudeen Sarr Many Gambians I posed this question to merely expressed their misunderstanding of the word or their unfamiliarity with the case. But having...
Read more
Opinions

By D.A Jawo Finally, after two months in the hands of President Adama Barrow, the draft Constitution has now been gazetted and hopefully, the process...
Read more
- Advertisment -