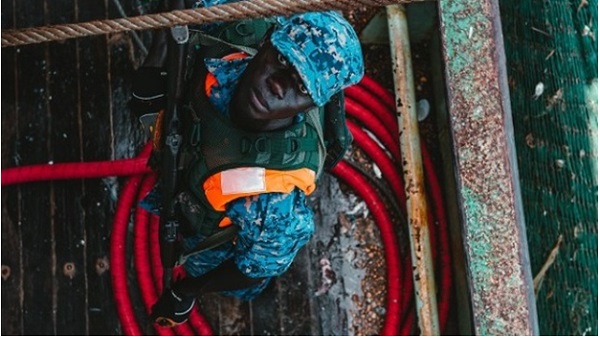 The Gambian Department of Fisheries and The Gambia Navy operating on board the Sea Shepherd vessel Sam Simon have arrested a trawler for fishing in an area reserved for artisanal fishermen.

The fishing vessel NiamNiokho was arrested for several counts of fishing within The Gambia’s nine-nautical mile Special Management Area in less than a month.

The incursions were confirmed both by the vessels’ own fishing log book as well as the fisheries observer’s fishing log.

The NiamNiokho is presently detained in the Gambian Port of Banjul.

The joint operation has already seen the arrest of three industrial trawlers for a number of fisheries offenses.

Dr Bamba Banja, a permanent secretary at the fisheries and water and resources ministry, said it is because of incursions like this that The Gambia has to police its waters to combat illegal, unregulated and unreported fishing.

“As a government, we are handicapped.

We are assisting the navy to get a boat to better patrol these areas. Capacity is a constraint,” Banja said.

The waters of The Gambia are particularly rich in biodiversity, as the country is positioned where the nutrient-rich Gambia River meets the Canary Current.

The livelihoods of over 200,000 Gambians are directly or indirectly dependent on local fisheries while the United Nations Food and Agriculture Organisation estimates that more than 46 percent of the assessed fish populations in the Eastern Central Atlantic are being over-fished.

Sardinella and other small pelagic species are of critical importance to Gambians which is why the Ministry of Fisheries and Water Resources instituted a nine-nautical mile Special Management Area to conserve waters frequented by artisanal fishermen.

Populations of sardinella are also rapidly declining due to these daily incursions.

Sea Shepherd’s partnership with The Gambia marks the seventh African coastal State to join a growing effort to stop illegal fishing around the African continent through joint at-sea patrols.

Since 2016, Sea Shepherd has been working in partnership with the governments of Gabon, Liberia, São Tomé and Príncipe, Tanzania, Benin and Namibia to combat IUU fishing by providing the use of civilian offshore patrol vessels to African coastal states so that authorities can enforce fisheries regulations and conservation laws in their sovereign waters.

To date, the unique partnerships have resulted in the arrest of 36 vessels for illegal fishing and other fisheries crimes.