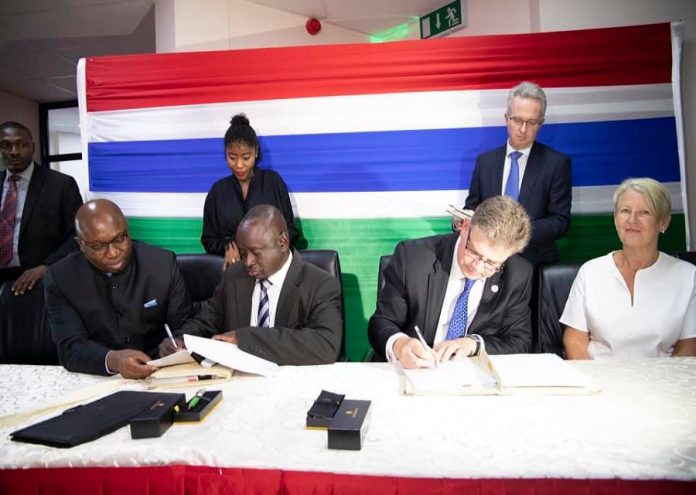 The Gambia Government has announced it has granted official licensing of Offshore Block A1 to British Petroleum BP Exploration (Gambia) Ltd., a subsidiary of BP Exploration Operating Company Limited.

According to the ministry of Petroleum, this license provides the necessary legal framework for the exploration of the A1 acreage, the eventual development of fields (upon the discovery of hydrocarbons) and the ultimate production of oil and/or gas from Block A1.

The License was signed on Tuesday by the Minister of Petroleum and Energy, Fafa Sanyang, witnessed by key government stakeholders and the executive delegation from the British Petroleum (BP) Petroleum House, Brusubi.

The deal, described by officials as a monumental achievement, represents one of the most historic and valuable agreements The Gambia has entered into since independence and has the realistic potential to positively transform the country and bring out significant transformative economic development pending the discovery of hydrocarbons and the efficient management of such discoveries.

The agreement, the officials say, is the culmination of years of work and the application of best industry practices through a most transparent process with the involvement of all the key industry stakeholders across government.

A statement from the Petroleum ministry said from the pre-launch consultations, to the official launch of the Licensing process in November of 2017, request for information process, request for proposal process and the eventual final negotiations for the A1 license, there has been an unprecedented interest in Gambian acreages from numerous international oil companies.

The statement went on: “Throughout these processes, our team of experts across our national institutions with assistance from the African Development Bank (through the African Legal Support Facility) and the law firm Bryan Cave Leighton Paisner (BCLP) with the support of local Counsel (Senghore Law Practice) under the leadership of the Ministry of Petroleum & Energy ensured systematic communication with stakeholders through the Ministry’s website and on international platforms.

The just concluded process has seen the review and continuous improvement of legal instruments connected to the Petroleum Sector and the adoption of a Model Petroleum Exploration and Production License Agreement which will ensure the protection of our resources, open new opportunities for domestic representation, as guided by our policy objectives, promote the involvement of local Gambian individuals, businesses and companies in upstream investment opportunities to ensure that The Gambia obtains the greatest possible benefits from the petroleum resources, develop our national capabilities in all aspects of the petroleum industry and obtain effective transfer of appropriate technology and skills related to upstream petroleum operations.

The signing of this monumental petroleum licence with BP, one of the world’s largest and oldest International Oil Companies, indicates that The Gambia will forge ahead with a true and strong partner, who will work with us to achieve our policy objectives to promote increased Exploration & Production activities. The provisions in the license ensure that petroleum operations are undertaken in The Gambia in a socially, economically and environmentally sustainable and responsible manner.

The Ministry will continue to pursue its vision to be performance-driven and would ensure that the Gambia’s Petroleum sector contributes to the sustainable development of the country. Our mission is to ensure maximum benefit from the country’s hydrocarbon resources through an efficient, safe and environmentally friendly manner that will enhance and contribute to the growth of our national wealth.

The signing of this prize-toping deal is a realisation of the Ministry’s mandate to harness and promote the country’s hydrocarbon potentials for the development of The Gambia through negotiating the award of exploration and production licenses, negotiating bilateral and multilateral cooperation agreements, and developing policies and strategies to enhance the development of the industry.

The Government of The Gambia through the Ministry of Petroleum and Energy will continue to pursue the attainment of its policy objectives to create a conducive, stable and predictable policy, legal and regulatory framework and a competitive fiscal regime with a view to attracting direct greater foreign investment in the upstream sector.

“We look forward to an inclusive development process with our partners as we start a process of institutional and public engagement for a clearer understanding of the industry to ensure the harnessing of all potential opportunities at our disposal as a country and its respective peoples. Periodic engagements, releases and milestone announcements on this and other licenses will be availed to the public as and when available following due process and in accordance with the license agreement and the laws of The Gambia.”