Congratulatory message to Her Excellency Dr Isatou Touray, new Vice President of the Republic of The Gambia 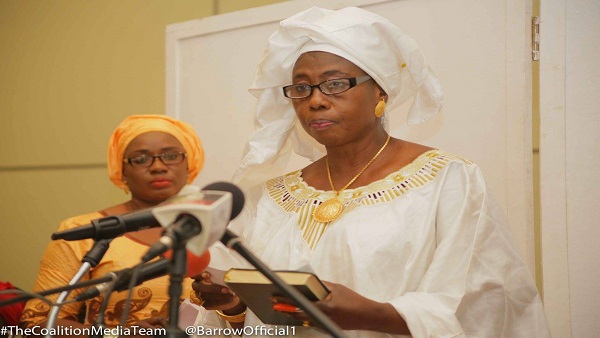 Your Excellency DR. Isatou Touray, Vice President Of The Gambia, and my dear friend and good Gambian Sister,

RE: WARM AND GRAPHIC CONGRATULATORY MESSAGE.-

Friday 15th March 2019, (“The Ides Of March”, William Shakespeare- “Julius Caesar”), was indeed a great day, in The Gambia’s Constitutional /Political history. It was indeed “a red-letter day” (ie an important or memorable day), when His Excellency President Adama Barrow, The President Of The Republic Of The Gambia & Commander-In-Chief of The Gambia Armed Forces, deemed it absolutely fitting, to evoke the appropriate Executive Powers (Sections:- 70 (5) (A), 71 (4) (B), 70 (3) & 71 (3)), vested in him by our present 1997 Constitution, to effect a major Cabinet Reshuffle, after which the following monumental political changes inevitably occurred, with immediate effect:- (1) His Excellency Mr. Ousainou Darboe, the then Vice President, was relieved of his post, and he was succeeded by Her Excellency DR. Isatou Touray, (your good self), the former Health Minister, and you are now overseeing The Ministry Of Health, (2) Hon. Mr. Amadou Sanneh, Minister of Trade, Industry, Regional Integration & Employment, was succeeded by Hon. Mr. Lamin Jobe (a Master’s Degree holder, in Public Administration, Poona University, India), (3) Hon. Mr. Lamin .N. Dibba, was relieved of his post as Minister Of Agriculture, and Hon. Mr. James .F.P. Gomez, Minister of Fisheries, Natural Resources & National Assembly Matters, is now overseeing that Ministry. “Once to every man and nation, comes the moment to decide, in the strife of truth with falsehood, for the good or evil side”, James Russell Lowell (1819-91), an erudite and inspirational Methodist hymn writer, and poet.

William Shakespeare, the erudite “Bard Of Avon”, in his masterpiece Play/Comedy titled:- “ As You Like It”, rightly wrote:-
“ All the World is a stage, and all the men and women merely players. They have their exits and their entrances. And one man in his time plays many parts, his acts being seven stages………..” Indeed Your Excellency Madam Vice President, as a distinguished and very famous Gambian lady, you have indeed “played many parts”, and you are still playing those parts effectively, in the Political, Cultural and Socio-Economic arenas of The Gambia. Politically, you are the first Gambian Woman, to bravely and patriotically present yourself as an Independent Candidate for a Presidential Election, (ie in 2016). “Vel primus, Vel cum primus” (Latin:- either the first, or among the first). You did not make any political mistake whatsoever, in giving up this laudable political ambition, to join “Coalition 2016”, whose then able and invincible Presidential Candidate or Flag bearer was, Hon. Mr. Adama Barrow, (as he then was), now by God’s Grace, His Excellency President Adama Barrow, after successfully winning the 1st December 2016 free and fair Presidential Election, thereby clearly defeating Ex-President Yahya Jammeh and his ruling A.P.R.C. Party, at the aforesaid polls. “Vox Populi, Vox Dei.”(Latin:- The Voice Of The People, Is The Voice Of God). I am very sure, that His Excellency President Adama Barrow, when he was seriously considering to appoint you as Her Excellency The Vice President, he must have also rightly considered your aforesaid monumental and patriotic political sacrifice, which you consciously made “ Pro Bono Publico” (Latin:- for the good of the public). As a Senior Canadian-Trained Theologian, the appropriate Theological quotation, that inevitably comes surfacing to the landscape of my mind is:- “The King’s heart is in the hand of The Lord, as the rivers of Water, he (God) turns it, how he wishes”, from The Book of Proverbs, Chapter 21, Verses 1 to 3, in The Holy Bible. The era of “women shall be seen, but not heard”, is now a thing of the past. You are a classic role model or mentor, for all Gambian Women and Girls.

From the Social perspective, you are a founder member of B.A.F.R.O.W. (a well known registered N.G.O. for Women Empowerment), and you are also, the first Gambian Woman, to have a PhD Degree in Development Studies (Gender Issues). You obtained your said PhD Degree with flying colours, from University Of Sussex, U.K., after obtaining your Master’s Degree in Development Studies, from The Institute Of Social Studies, in The Hague, The Netherlands, after obtaining your Bachelor’s Degree in Education And English, from Usman Danfodiyo University In The Federal Republic Of Nigeria.
Coincidentally, like you, by God’s Grace, I also did Postgraduate Studies in The Hague, alias “The World’s Judicial Capital.” From 7th July to 15th August 1997, I attended a Postgraduate Public And Private International Law Course, at The Peace Palace/International Court Of Justice (I.C.J.), and The Hague Academy of International Law, and I obtained Postgraduate Certificates In Public And Private International Law, from The Under Secretary General And Legal Counsel at The U.N. Legal Affairs Office, and The Executive Director of The United Nations Institute For Training And Research (U.N.I.T.A.R.) in Geneva, DR. Marcel Boisard. Upon successfully completing the said intensive Law Course, with a highly competitive U.N.I.T.A.R. Fellowship, I then became both:- (1) A Fellow of U.N.I.T.A.R. and (2) A Fellow Of the said Academy.

The incontrovertible evidence, of you also being a prolific seasoned and accomplished writer, was that in 1998, you were among erudite scholars/researchers from four English-Speaking/Anglophone West African Countries namely:- The Gambia, Ghana, Sierra Leone and Nigeria, who ably co-authored a famous Sub-Regional Women’s Rights Law Book titled:- “Women And Law In West Africa”, which was professionally published by The Human Rights Center, of The Faculty of Law of The University Of Ghana, Legon. The publication of the said book, was a popular literary project that was fully funded in U.S Dollars, by Carnegie Corporation, in The U.S.A. The 6 Gambian Co-Authors/Researchers were:- (1) Your good self, you were then the able Co-ordinator of “Gender & Management”, at The Management Development Institute (M.D.I.), and you wrote on:-“Women, Land Tenure & Land Rights”, (2) Hon. Mrs. Hawa Kuru Sisay-Sabally, who was then, the Hon.

Attorney General & Minister Of Justice. She is the first Gambian Female Lawyer, to be Officially appointed in the said Legal capacity, and Hon. DR. Fatou Bomm Bensouda (O.R.G.), My Learned Friend and the current Chief Prosecutor of The I.C.C. in The Hague, The Netherlands, was the second. Hon. Mrs. Sissay-Sabally wrote on “Inheritance in The Gambia”, (3) Ms. Nana Ama Ofori Atta, The Director Of Vinasha (a registered N.G.O.), who wrote on :-“Violence Against Women In The Gambia), (4) Ms. Mahen Njie, a Senior Statistician/Researcher at The Central Statistics Department (C.S.D.), who wrote on:- “Family Law In The Gambia”), (5) Mrs. Amie Gaye, our Country Co-ordinator and a Senior Statistician/Researcher at The C.S.D., who also wrote on:- “Family Law In The Gambia” and (6) lastly and by no means the least, my humble self. I also wrote on:- “Violence Against Women In The Gambia”. I was then a State Counsel at The Attorney General’s Chambers & Ministry Of Justice, and a Founder Senior Law Lecturer at The Law Department of The Gambia Technical Training Institute (G.T.T.I.), (from 1994 to 2007), where I was a Founder Senior Law Lecturer, in both:- (1) the two-year Diploma-In-Law Course and (2) The Institute Of Legal Executives (I.L.E.X.) Course. The G.T.T.I.’s External Senior Legal Consultant for the I.L.E.X. Course, was a Senior British Solicitor, my good friend and colleague, Mr. Chris Buckwell, who is now deservedly, a Senior British Immigration Judge. When I was doing my Master Of Laws (L.L.M) Degree/Postgraduate Course in Environmental Law & Management, at The University Of Wales, Aberystwyth, U.K, Mr. Buckwell kindly arranged for Lord Molyneaux Of Killead, to invite me to a high-profile Reception, at The House Of Lords, (The Upper House Of The British Bicameral Parliament), on behalf of The Directors Of I.L.E.X. Tutorial College, on Thursday, 27th January 2000, since I was a G.T.T.I. Founder Senior I.L.E.X. Law Lecturer.

When I was The Solicitor General & Legal Secretary, (The Deputy Chief Legal Adviser Of The Gambia Government), by the grace of God Almighty, (from 2007 to 2009), I was travelling on an Official African Development Bank (A.D.B.) trip to Tunisia, with Mr. Cherno Marenah, ( the present able Solicitor General & Legal Secretary), and we met both your good self and Mrs. Amie Bojang-Sissoho, (the present able Director Of Press & Public Relations, at The Office Of The President, at State House). We all happily met at the International Airport at Casablanca, Kingdom Of Morocco, and while we were waiting for our different flights, we had a very fruitful brain- storming session, on Women’s Rights and Women’s Empowerment in The Gambia. As a Senior Human Rights Lawyer and Author, I am happy to say authoritatively, that your recent and well deserved Official appointment as, Her Excellency The Vice President Of The Gambia, by His Excellency President Adama Barrow, is indeed a bold step in the right direction, for Women’s Empowerment in The Gambia, and it is also in harmony or consonance, with what has now become a good and enduring tradition in The Gambia, for a distinguished and highly educated Gambian Woman, to be Officially and deservedly appointed as, Her Excellency The Vice President Of The Republic Of The Gambia.

I am highly elated to inform you, that I am about to complete the final manuscript of my fourth Law Publication titled:-“Violence Against Women And Women’s Rights In The Gambia (Case Study)”. I am also happy to inform you, that you are among the prominent Gambian Women, whom I have deservedly talked about, in my aforesaid proposed Women’s Rights Law Book. Any help which Your Excellency will be able to give me, for the publication and launching of this book, will indeed be highly appreciated. Mr. James M.B. Abraham, an Oxford University-Trained Educationist, and a former Member Of The I.E.C., (who kindly edited my said manuscript), has reliably informed me, that in 1965 just after our Independence on 18th February, when he was the Deputy Headmaster Of Crab Island Secondary Modern School, (when the late Mr. Alieu E.N.A. Badjie alias “Mr. Kama Badjie”, was the substantive Headmaster), you were among the most intelligent students, in the said Citadel Of Learning, and he is now appreciating your achievements in different walks of life, or different fields of human endeavor, both in The Gambia and abroad.
In conclusion, let me avail my humble self, to warmly congratulate you, for your recent and deserved Presidential appointment, as Her Excellency The Vice President Of The Republic Of The Gambia. I am conceptually and evidentially certain, that you will indeed acquit your good self creditably, and you will certainly deliver as expected of you. “Those to whom much is given, much is expected.” I wish you a happy and successful tenure of Office, as Her Excellency The Vice President Of The Republic Of The Gambia.
Please accept Your Excellency Madam Vice President, the renewed assurances of my highest consideration and fraternal esteem.

Yours In The Rule Of Law

Celebrate the special Eid-al-Adha in fighting against COVID-19

By H.E. MA Jianchun, Chinese Ambassador to The Gambia In a few days, Muslim friends in The Gambia will join Muslims around the world for...
Read more
Message