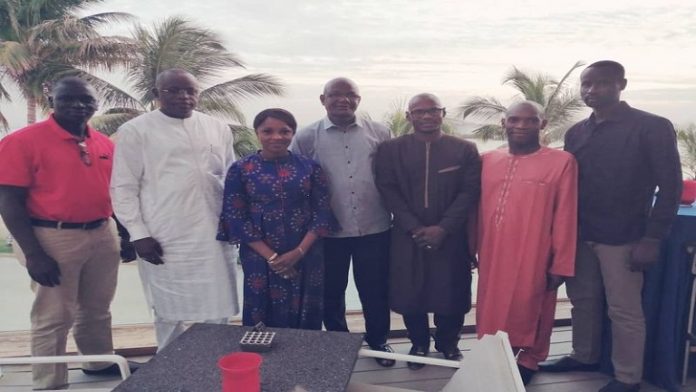 A delegation of sports journalists from the Sports Journalists’ Association of The Gambia, SJAG was in Dakar last weekend at the invitation of their counterparts, the Senegalese Sport Press ANPS for the latter’s annual sports awards night.
The delegation was led by Musa Sise, President of the SJAG.

Over the years, the two associations have enjoyed a fruitful cooperation attending each other’s awards nights and cooperating on international sports issues. Both associations are members of the global sports press association (AIPS), founded in 1924.

This week, AIPS announced some members of both associations as nominees for this year’s Global Sports Media Award with six coming from The Gambia. The winners will be announced in February during the AIPS congress to be hosted in Budapest, Hungary. The two associations also play an annual friendly football match, which on this trip ended 1-1 in Dakar.

On the side-lines of the awards night, the sports ministers of The Gambia and Senegal, Hadrammeh Sidibeh and Matarr Bah respectively had a fruitful meeting with the executive committees of both sports journalists’ associations . The meeting focused on how to strengthen the relations between sports ministries and the sports journalists for the promotion and progress of sports in the two countries. The meeting took place at Terrou Bi Hotel in Dakar.

Both Abdoulie Thiam and Musa Sise, Presidents of the associations respectively renewed their commitment to strengthen the already existing bilateral ties between the associations and members.