GINA BASS IS AFRICAN SPORTS MAGAZINE’S ATHLETE OF THE MONTH 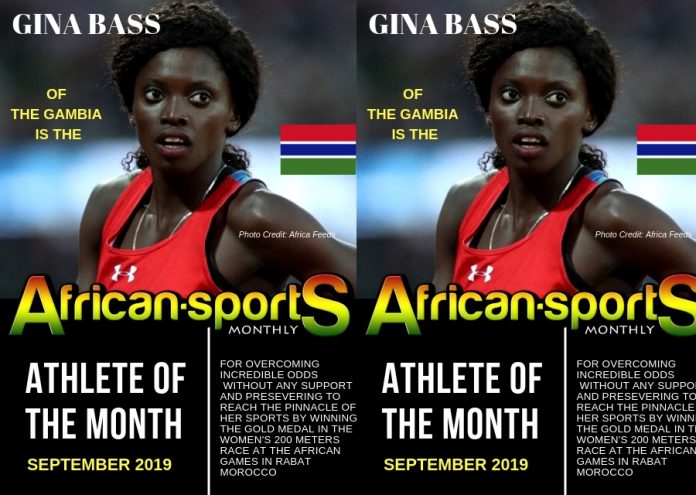 Gina Bass of The Gambia, winner of the women’s 200 meters gold medal at the recently concluded African Games in Rabat, Morocco is the African Sports Monthly Magazine’s Athlete of the Month, for September.

A citation published by the magazine stated that Gina is being recognised for her strength of character and exemplary performance on the track.

“Overcoming the worst of odds, and abandoned to fend for herself, she pulled herself from the abyss of despair and instead of throwing her hands up and giving up, she trudged on to now stand at the pinnacle of success in her sport, showing her peers and future generations, that it may rain but the rain will stop and the sun will certainly shine once again,” the Magazine wrote in tribute to the Gambian’s success in Morocco.

The magazine sent best wishes to Gina hoping that she will excel to even higher heights at the World Athletics Championships in Doha. Qatar starting later this month and the 2020 Olympic Games in July/August in Japan.

African Sports Monthly Magazine is Africa’s first ever and only comprehensive digital and print sports magazine covering all sports disciplines across the length and breadth of the continent. They can be accessed at www.africansportsmonthly.com