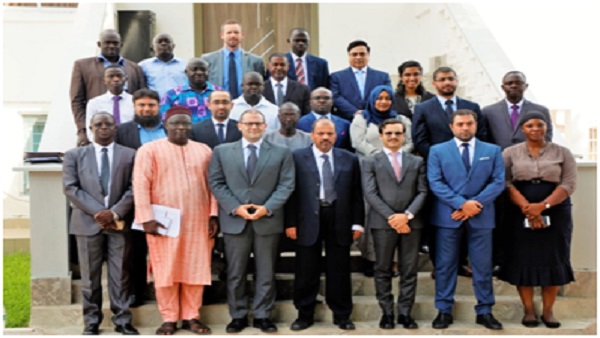 Following His Excellency President Barrow’s three-day working visit to Doha, Qatar, a high-level delegation from the gulf state has arrived in Banjul this week to make a first-hand assessment of the development priority needs of The Gambia.

The group’s first port of call was the Office of the President, where they held discussions with the Department of Strategic Policy and Delivery on Monday.

They were taken through a powerpoint presentation on the various aspects of The Gambia’s development blueprint – the National Development Plan, particularly high priority areas.

Speaking to waiting reporters after the meeting, Hamad Mohamed Al-Rumaihi from the Central and West African Countries’ Division, Department of African Affairs at the Qatari Ministry of Foreign Affairs, described the trip as “a fact finding” one.

“We know that there is an excellent relation between Qatar and The Gambia, which translated into the state visit by President Barrow to Qatar.

This is a follow up to that state visit to help assess Gambia’s needs,” Al-Rumaihi explained.

The delegation comprises line ministries of health, education and economic empowerment areas like agriculture and youth and sports. Additionally, the private sector, national and international NGOs operating from Qatar are also represented, and they were led by the Qatari Ministry of Foreign Affairs and the Qatari Fund for Development.

While in Banjul, they will visit different departments and organisations.

Samer R Fragieh, senior strategic planning advisor at the Qatari Fund for Development, said the mission was a strong reflection of the strong ties between Qatar and The Gambia, as well as the leadership of both governments.

“We are hoping that from this trip, we can get back to Doha with [a] clear understanding of the priorities of development based on Gambia’s NDP,” he said, noting that their visit is designed to fast-track and cut through government bureaucracies in support of Gambia’s development.