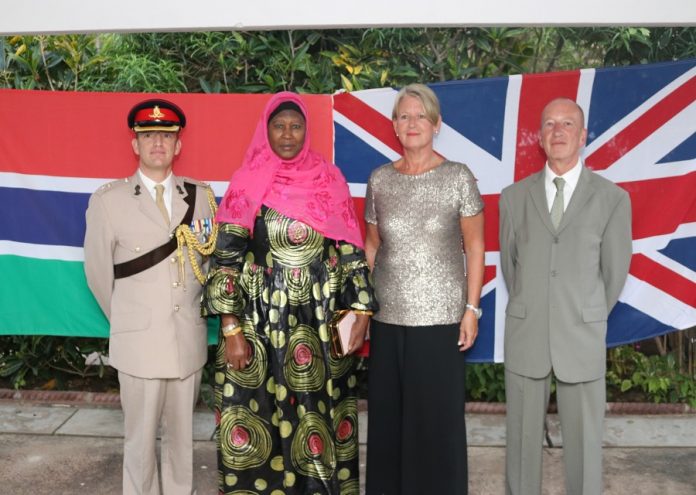 In a tradition upheld by British High Commissions and Embassies around the world the British High Commission Banjul hosted a reception on 26 April 2018 to mark the occasion of the 92nd birthday of Her Majesty Queen Elizabeth II as well as to celebrate the long history and friendship between the United Kingdom and The Gambia. The High Commission and assembled guests from across Gambian society and the international and British communities were honoured by the presence of Her Excellency Madame Vice-President Fatoumata Tambajang.

The celebration came at the end of 7 days that have seen HE President Barrow’s warm welcome to London by Her Majesty The Queen for the Commonwealth Heads of Government meeting as well as the birth of The Queen’s 6th great grandchild, Prince Louis Arthur Charles.

In her speech at the reception, UK High Commissioner Sharon Wardle, described how for The Queen, as Head of the Commonwealth family of nations this has always been a community for which she has special affection and regard, as well as high ambition. The Gambia’s re-entry into the Commonwealth and participation at the Commonwealth Heads of Government meeting was therefore a particular source of joy and celebration – and the UK was proud to have been an active and vocal supporter of the path to re-entry.

She spoke of how last week’s summit was about far more than warm words, with a combined population of 2.4 billion of whom 60% are under 30, the Commonwealth is committed to working together towards a common future for its young people. A goal that clearly resonates with the New Gambia , and the High Commission will work together with its Gambian and international partners to help achieve this goal.
The High Commissioner congratulated His Excellency President Barrow the Gambian Government and its people for the progress made over the past 15 months with recognition for the role that Gambian young people are playing to help shape a brighter future through greater equality, inclusion, political engagement and protection of the environment. She also spoke of the power of the Gambian sisterhood in the fight for women’s empowerment.

The event was also an opportunity to celebrate the many examples of UK-Gambia partnership and the role the UK has played in supporting the Government in its transition both internationally and in The Gambia. The High Commissioner cited the 70 years of groundbreaking research at the MRC Unit The Gambia; the tourism sector and the many British nationals that visit each year; projects covering democracy, human rights and justice; security and aviation safety partnerships as well as the Chevening Scholarship programme which has gone from strength to strength in recent years.

The High Commissioner concluded by paying tribute to the generosity and kindness shown by British nationals and the Gambian diaspora in the UK whose support to communities across the country goes far wider than the world of governments and diplomacy. In the words of England’s most famous bard, William Shakespeare “How beauteous mankind is …. that has such people in it”