‘Who would think a poor boy from Koba Kunda School would be president?’ 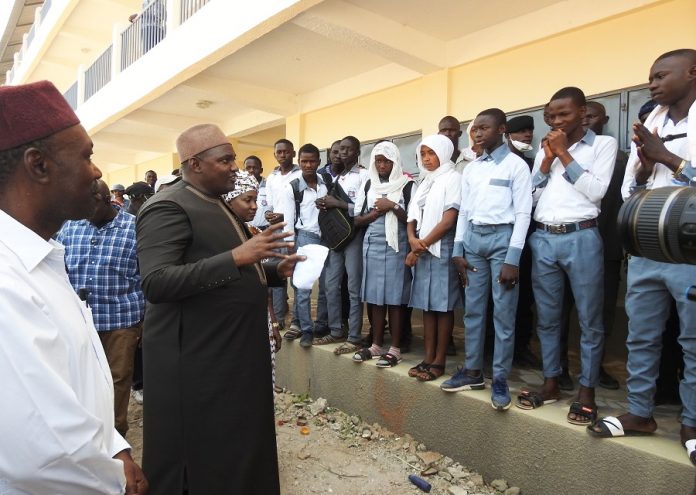 By Sanna Camara,
Media officer, Office of The President

Koba Kunda was one of the oldest schools in Basse and the Upper River Region. A boy from Mankamang Kunda, full of life and hopes got enrolled by his dad in 1976. Born to Mamudou Barrow and Kadijatou Jallow, Adama Barrow grew up in the small village of Mankamang Kunda in Jimara, Upper River Region. He would be among the few children opportune to be in school from that village. He was later transferred to Koba Kunda Primary School.

From 1976 to 1981, Adama Barrow made very good friends with teachers due to his discipline at school and exceptional performance in subjects like mathematics. One of such was Mr Jallow. Their relationship would continue beyond the school to become a family bond. Mr Jallow became a personal mentor for the young Adama Barrow.

Over forty years later, he returned to the school to pay an unannounced visit as President of The Gambia. President Barrow was taken to his former classroom and he gave a vivid account of the position of his desk at the back of the classroom.
Headmaster, MrSaibeh Darboe was elated to have a former student of the school pay a surprise visit as president of the republic. When he took over as headmaster some eight years ago, he recalled how dilapidated the school had been.

For 41 years as a career teacher, the headmaster said he had never experienced a teaching environment as bad as what he found at Koba Kunda.
Today, it is in very good shape, which makes President Barrow proud as he visited his alma mater on Thursday, 27thFebruary 2020.

Upon coming to office in 2017, the president on a tour of the country, noticed poor state of the school. It had no perimeter fence, classroom blocks were at the lowest standards, and water supply was very scarce for the students, and the morale of the teachers were at an all-time low.

He sought the intervention of MRC-Holland Foundation. Until the foundation began its intervention in 2018, the school used to be a thoroughfare.
The foundation has already built 52 classrooms in the school, with tiled floors, fully furnished and equipped.

Headmaster Darboe gave the details of the developments since the intervention: “There is a new fence and a borehole. Three storey classroom blocks have been built and the school is now fully secured.”

The school is fully transformed from a lower basic (formerly primary) school to an upper basic and a senior secondary – all within one perimeter. The next stage will provide the school with an assembly hall and staff quarters.

As a government, education ranks top on the priority sectors of the National Development Plan. The president assured them of continuous government support.

The headmaster is proud to have such a transformation under his watch. The president promised solar power for the school as a lasting means for the power supply challenges.
On a conducted tour of the school, he visited the school garden. He showed appreciation of the culture of gardening that is still alive in the school by pledging to construct a perimeter barbed wire fencing for the garden… As a proud descendant of a farming family, he recalled his school days spending entire summer holidays on the farm to help his dad.
Later as a businessman based in the city, he had maintained a farm at the Yarambamba Estate to explore a tradition his dad handed him.

The president had an advice for the students:
“Let them be disciplined. They are the leaders of tomorrow. This is proven. I have been a student here, today I am the President,” he said.

If this could happen for him, so it can for the students that lined and cheered him as he waved and stopped to offer words of inspiration.
“Who would have ever thought a poor boy from Koba Kunda School would become president of the country? he asked.