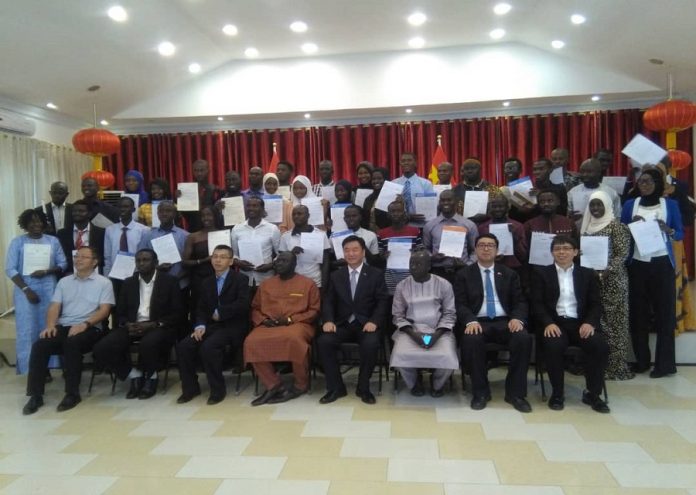 They are all sponsored by the Chinese government as part of the relations between the two countries, especially in the area of capacity building.

At a farewell reception held for the students at the Chinese Embassy in Bijilo, Chinese Ambassador Ma Jianchun said the Chinese Government scholarship is a key programme for China- Gambia cooperation in the field of human resource development, which he said was a crucial part of the eight major initiatives announced by President Xi Jinping at the 2018 China-Africa summit in Beijing.

“This year’s 40 awardees not only represent the best of the Gambia’s youth, but also demonstrate great diversity and prospect for the new Gambia. The majors chosen by the awardees cover a wide range that may benefit the implementation of the National Development Plan from medicine, engineering, information technology and food science, finance, economics, management and international relations,” Ambassador Jianchun said.

He further disclosed that the Chinese government has over the past four years, awarded full scholarships to academically outstanding Gambians with over 120 students awarded among which 58 are pursuing undergraduate degrees, 58 masters and 6 doctorate degrees.

“Human resources are crucial for any country to develop.

I am confident that the China-Gambia capacity building cooperation will continue to bring out the best of the Gambia’s human resources and serve the Gambian people’s efforts in achieving sustainable national development,” Ambassador Jianchun concluded.

The minister of Environment, Climate Change and Natural Resources Lamin B Dibba who deputised for the Higher Education Minister Badara Joof, praised the Chinese government for their long –term support and excellent contribution to the socio- economic development of the Gambia.