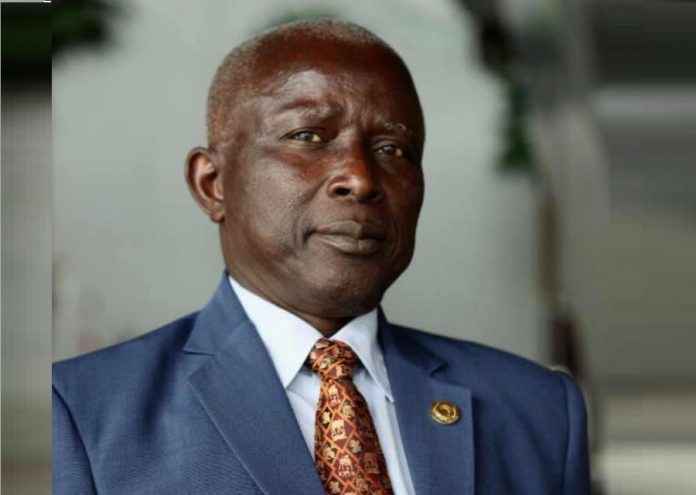 I called Him ‘Alagi’, my wife and children and many others in our circle called him ‘Uncle’, his colleagues called him ‘Sambou’, ‘Sam’ or simply ‘Gassama’. Whatever good name you called him by, Alhaji Muhammad Imam Sambou Gassama (MIS Gassama in short), was the first son/child of Aja Fatou Njie Funneh and Almami Gassama of blessed memory, of 18 Imam Omar Sowe Street in Banjul, The Gambia. MIS Gassama meant many things to many people: to his natural family, and the multitude of us who had the fortune of being his extended family, an honour acquired through his brand of unadulterated love, trust and loyalty, Alagi was the textbook definition of a patriarch – a go-to father figure who had something for everybody, and a leader who had the time, energy and resources to be part of our lives. He listened, participated in, empathized with, and had an educated view on every situation, and a solution for every worry you brought to him. Afang Jukung, as many Baddibunkas fondly called him, represented the Mandinka metaphor of the all-purpose support and succour you get from the African Baobab tree – food, shelter and security. Therefore, for his family and wide global circle of friends, colleagues and acquaintances, our Baobab tree has fallen!!

MIS Gassama’s life work was towards making the world a better place than he found it. He did this in many ways: through cultivating, nurturing and influencing a global circle of family and friends, with his values of co-operation, collaboration and community; through learning, teaching and creating knowledge; through community organization, service and leadership; and through actions in volunteerism and charity.Living true to the “Imam” in his name,Alagi Sambou featured prominently as Muslim elder, leader and authority on Islam, both in The Gambia and among the expatriate Muslim community in Addis Ababa. He was a constant pillar and leader in the Gambian and West African community in Addis Ababa throughout his almost forty years’tour of duty there as a staff of the OAU/AU. He led the very active OAU/AU Staff Association both as Secretary General and President, for a combined period of at least ten years.

His achievements as leader of the staff association are too numerous to list. Dr. Omar A. Touray is right in his piece that MIS Gassama “epitomized the genuine person we all strive to be: sincere, helpful and harmless”. I would add for emphasis that these values were more than simple ideals for Alagi, they actually defined him. Uncle Sambou was welcoming, engaging and open, and had an intelligent global view which to some appear too liberal, especially in view of his solid religious education. His raw intelligence, intellect and capacity to connect and understand are noticeable within first contact. Alagi was a trailblazer in more ways than one in so far as concerns his specialized area of competence, i.e. mastery of languages with particular reference to translating and revising texts from Arabic to English and vice versa. I cherished with pride the moments I witnessed him revising the works of native speakers of the Arabic language including people who claimed superior academic qualifications in the art of translation.

Through his own search for knowledge and self-development, Alagi became a lifelong learner, researcher, educator and advocate for continuous learning. Many have benefited from his tutoring and mentoring, both on the job, first as an Arabic/Islamic teacher at Brufut village and Malfa school in Banjul in the 1970s; and later during his long international civil service career at the OAU/AU which lasted a solid and resourceful 39 years. He started at the OAU as Arabic translator in 1981 and rose through the ranks to the all- important position of Reviser, the equivalent of editor-in-chief in the world of journalism and news media. I joined the African Union in 2006, at the time of his statutory retirement, and was witness to the organization keeping him on uninterrupted contracts, for over a decade since his retirement, which was a tacit recognition of his near indispensability.

He led the AU’s Arabic translation team for the better part of 15 years and was pivotal in various knowledge building and management programs of the OAU/AU’s Directorate of Conference Management and Publications. Indeed, MIS Gassama taught, mentored and coached many translators, proof-readers and other language staff. Among his mentees and proteges, I recall Alhagi Mustapha A.R Deme, Mr. Chiekhou Mbaye, and Alhaji Omar Ndow, all of whom are still associated with or continue to work for the African Union. To attempt to catalogue MIS Gassama’s scholarship and achievements in education will be a herculean task. However, it suffices to mention that he was among the founding fathers of the Gambia Islamic Union through which the all-important Talinding Arabic Institute was conceived and established. He is a prominent name and point of reference in Islamic and Arabic education in The Gambia as can be attested by his peers notably Alhaji Baba Drammeh, President of Rawdatul Majaalis. Arafang Sambou has authored four books:

Fragments of my Reflection-a collection of his essays and articles; From OAU to AU, The Odyssey of an International Organization- an insight into the history and transition of the OAU to AU and associated issues; Arabic/Islamic education in The Gambia: Pioneers and other actors- which contains a review of the work and lives of prominent Gambian Arabists and scholars including icons like SitokotoDarbo, SerignAlioune Faye andKang Kalifa; and In search of Knowledge and Self Development- an autobiography he prefers to call a diary which is so interesting that I and his other children have asked him to publish a second version of. These are in addition to his collection of poems and verses in Arabic.

In concluding this memorial piece on our Baobab tree, I commend the legendary, purposeful and well-lived life of Uncle Alhaji Arfang Muhammad Imam Sambou Gassama to all, especially the young and aspiring. Uncle Gassama’s life will forever represent exemplary inspiration and motivation for what is possible with focus, hard work, sincerity and determination, through the tools and resources of community, friendship and an open and liberal outlook.

To his wife Aunty Kaddy; children: Lamin, Kalilou, Aja Fatou, Mama, Siaka, Funneh, Abdou; and grandchild Kadeja, let’s take solace in the fact that Dad has left us with so much in virtue, values and spirit to eternally benefit from and remember him by.
Adieu and rest in peace Alagi.

- Advertisement -
Share
Facebook
Twitter
Pinterest
WhatsApp
Previous articleThe Judiciary: Beacon of hope for the protection of human rights and democracyin The Gambia
Next articleAre you hiding under your bed, Mr President?
Join The Conversation

By Hassoum Ceesay, NCAC Pa Sanyang aka Stoneman who died last week aged 63 was a long serving staff of the NCAC of 18 years...
Read more
Tribute

By Basiru O.Ceesay “And worship your lord until there comes unto you the certainty (i.e.  death)'' Is one of the various ways in which the...
Read more
- Advertisment -