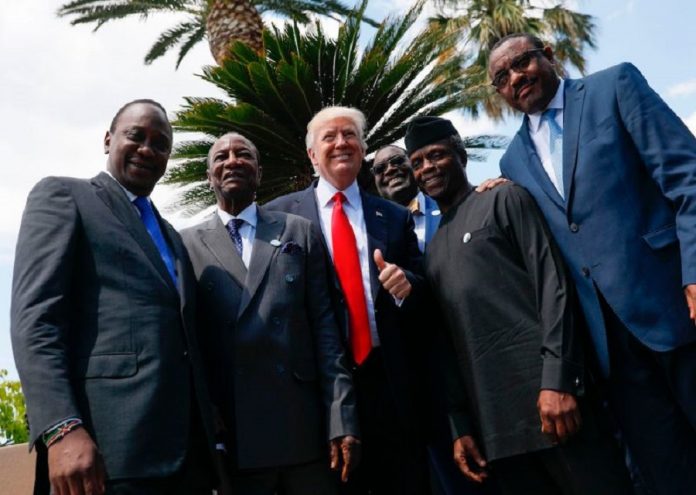 Last night’s US White House press update on the coronavirus pandemic triggered goose bumps all over me when President Donald Trump spoke about his unawareness until now of America’s special financial support to Africa totalling US$6 billion. It is my gut feeling that we will lose the aid in the same manner he acted two weeks ago in cutting the annual US$500 million to the World Health Organisation (WHO). He gave the implausible excuse that the WHO connived with China that escalated the global pandemic. I don’t know what excuse he will come up with for withdrawing the assistance to Africa but I expect it to happen very soon.

It is however obvious that Trump was not truthful when he said that he was never aware of that US aid until now because in 2017, he made an attempt to slash US$1.5 billion from the amount until the World Health Organisation (WHO) sobered him up with the unprecedented ramifications of doing so. The money has apparently been very effective in globally reducing Aids-related deaths by 55% after peaking in 2004 to 1.7 million. In 2018 thanks to the antiretroviral therapy (ART), a drug provided free of charge to most infected people the majority of whom live in sub-Saharan Africa the number decreased to around 770,000 deaths per annum.

With all his negative attributes, the credit goes to former President George Bush on whose watch the US government approved the magnanimous assistance in 2008. At that time, the patented annual cost of the drug in America per person was around US$10,000 which had to be generically reduced to US$200. According to the WHO, only 79% of infected people know about their status with 78% of them now accessing the drug which if taken according to the recommended dose will suppress the viral count in the human system to zero. In low and middle income countries, it further prevents mother-to-child transmission of HIV in the wombs of pregnant women by 92% compared to 49% in 2010.

The stats also illustrate that 69% of infected people, 25.6 million live in Africa.
Trump could have been restrained from touching the funds in 2017 because of its unfavourable political implications but with the ongoing pandemic wreaking havoc on the global economy, he has all the justification to use the funds in what is increasingly looking like a groundbreaking depression looming in the horizon.

As usual, many people will blame him because of who he is, “Donald Trump”; but I believe any president in office at this time would have considered the radical but necessary action. You don’t need to be a professor of Economics at Harvard to understand that paying unemployment at the current rate and magnitude in America or across the developed world as a result of the pandemic with no work created but precipitously lost on a daily basis will sooner rather than later translate in the bankruptcy of any economy regardless of resilience.

And, before playing generosity to even your neighbors you have to have enough for your own sustenance. Say whatever you may against Trump, the fact remains that he is a candid president who will say it as he believes, wrong or right, true or false; but I am sure other Western leaders are stealthily considering the same options of cutting major financial assistance to Africa to rescue their paralyzed economies.

They shouldn’t be blamed either. Like I said before this is the moment or never for African governments to stand together and help their peoples out of the bondage of living under the mercy of Western donors. The times are changing, posing new challenges that should either make or break us. Cutting the funding of AIDS drugs will cause another pandemic in Africa and subsequently around the interconnected world. But these Western leaders are too desperate to see beyond the disaste affecting them now.

The US$6 billion Aids-prevention funds Trump plans to slash from Africa is about 10% of the US$56 billion reportedly stolen annually by our politicians and public officials and saved in Western banks or offshore non-taxable accounts. In the 2016 financial scandal of the “Panama-files”, records revealed offshore holdings of 140 politicians and public officials from around the world including Africans hiding stolen money since in ’70s with the help of unscrupulous Western bankers.

They have been offshore havens created in a manner so hard to trace that most of their owners would often die leaving the cash unclaimed.
Africans have to get their act together and do whatever it takes to investigate and demand the return of all funds back to Africa, illegally hidden abroad.
Again our leaders must solicit the help of our sympathetic and competent bankers, economists and accountants in the diaspora plus our conscientious lawyers to form a task force of tracing these wealth and returning every dime
home. If the AU, Ecowas and other African organisations were not compromised by puppet regimes and useless ambassadors, the action could have started from there.

Stopping the wars funded and fueled in Africa by the greedy Western world must be prioritized by perhaps another African task force. Libyans for example will never stop fighting over nothing, lest they unite and demand the return of the trillions of dollars saved by the late Muammar al-Gaddafi in their illicit banks that could have transformed the war-torn nation into a paradise on earth.

General Sani Abacha’s wealth and many Nigerian military heavyweights in the ’70s and ’80s who may have died long ago are still in those fraudulent banks unclaimed and will never be willingly returned.

Can you remember Karim Wade, the son of former Senegalese president Abdoulaye Wade accused and for a while jailed for allegedly stealing US$240 million from the Senegalese government when his father was in power? Most critics still believe that Karim actually stole the money and is as usual sitting in a secret foreign bank especially when his co-defendant Mamadou Pouye was busted for bribery with foreign investors in the “Panama Papers” revelations.

President Macky Sall for a while locked him up with what was believed to have been sufficient evidence for his conviction and used it exhaustively for political expediency until some financial wizards started exposing his own crookedness and that of his family members equally stealing and hiding huge amount of Senegal’s money through corruption and stashing it in European and North American banks. Sall had no choice but to unconditionally release young Wade in the name of political reconciliation. He is just another nasty African political crook.

An African-Financial-Recovery Taskforce (AFRT) formed by Africans can let the Western world know about the difficult times the continent faces because of the coronavirus pandemic, trace all stolen wealth, unimaginable in amount, and demand their return to the continent in the loudest international cry for justice. The threat of another wave of Aids pandemic in the continent is enough to kickstart the campaign. With proper coordination and a genuine commitment to help Africa, the mission will succeed and change our fortunes forever.

Our traditional prisons mostly built and inherited from our colonial masters and still serving the same purpose of jailing petty or what I call circumstantial criminals must be emptied and rehabilitated for corrupt politicians and civil servants having no conscience or mercy for the oppressed masses.

The circumstantial criminals are created by the nasty officials robbing the people of every opportunity of realising their full potentials and leaving them with no choice but to be who they are, thieves and thugs.

Samsudeen Sarr currently on a sojourn in New York, USA, is a former commander of the Gambia National Army and diplomat in Washington. He is the author of several books.