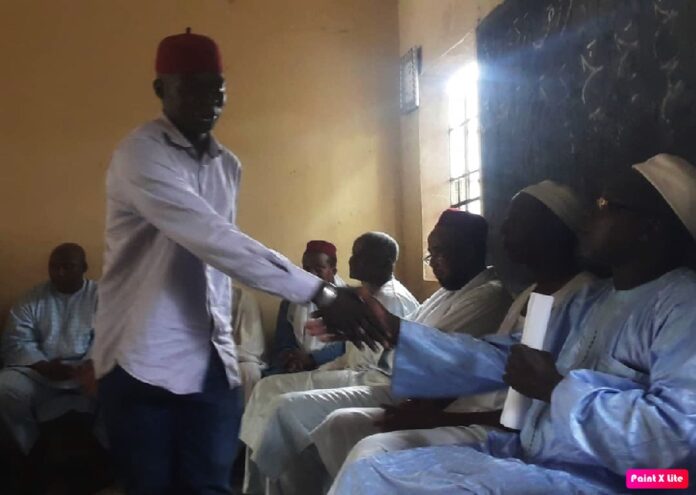 Ahlul Bait Foundation, the umbrella body of all the ‘Sheriffs’ in The Gambia, over the weekend received in audience Ginkon Foundation for Development.

The meeting, which was held at Brufut Sheriff Kunda, was meant to set the ball rolling for the two foundations to work hand-in-glove for development.

Sainey, president, Ginkon Foundation for Development, said the organization benefits monetary assistance from only two people, which they use to provide relief to underprivileged communities across the country.

Kantong T Marenah, one of the speakers, said Ginkon looked for a community to back them, and there’s nowhere else better than the Sheiffs.

“The sheriff’s belong to everyone. If anyone comes in, we welcome you. Be assured that we will stand by you in every way possible. We have accepted your request and we pray for you,” Amfaal said.

Mamina Hydara, head of organizing committee, said: “You’re on the right path. What I see you in only happens in Senegal. For a group to adopt the Sheriffs starts with you. We are happy about this. And we thank you for recognizing our status.”

Lamin Touray, a member of Ginkon, thanked the Ahlul Bait for accepting their request. He said if you want to lean on someone for guidance, look for those who are righteous and that’s why they chose the foundation.

“We want to continue helping people but we need prayers and guidance to sustain it. That’s why we are happy to be here today. We are submitting ourselves to you and we are looking forward to having a fruitful relationship,” he added.

Serigne Hydara, vice president, Ahlul Bait Foundation, spoke briefly about the history of the foundation and how Sheriffs are slowly binding together, citing the public prayers held a few years ago for the nation.

Abdou Majid Hydara, auditor, contributed: “We are happy. This place is a Sheriff house. And by the grace of God, all our prayers will be answered. We will pray for you. And we are looking forward to having a good relationship with your organisation.”

Kebba Madi Bojang, CEO, Ginkon Foundation, promised the Sheriffs his support, which will start with drilling a borehole and a possible school in the future.