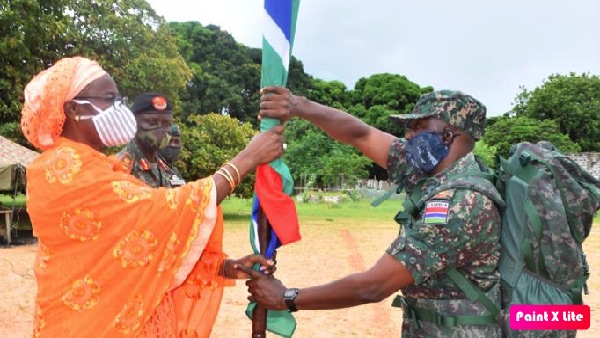 It could be informative for the public to know that the troops forming this deploying contingent underwent a month long Pre-Deployment Training in Battle Lessons, Battle Exercises, Rules of Engagement, Human Right, Cultural Diversity, Convoy Operations, Anti Ambush Drills, Searches, and Public Order Operations amongst others.

GAMCOY 23 consists of 132 personnel of all ranks and would be led by Lieutenant Colonel Ebrima Krubally who was until of recent the Commanding Officer of 4 Infantry Battalion in Kanilai. He will be assisted by Major Abdou Jatta as his Second in Command. The contingent consists of 13 officers, 119 other ranks and 11 female soldiers. They will leave for Darfur in two batches on 2nd and 23rd September 2020 respectively.

The normal Farewell Parade and deliberation of Statement usually presided over by His Excellency the President and Commander-in-Chief of the Gambia Armed Forces could not hold due to the COVID-19 pandemic. Consequent upon this situation, this year’s farewell to our troops has been conducted in a low-key fashion at the Gambia Armed Forces Training School in Bakau on Tuesday 1st September 2020.This has been done in line with the Gambia Armed Forces high command’s adherence to the international protocols as well as the State of Public Emergency Regulations.

Speaking on behalf of the Minister of Defence, Honourable Sheikh Omar Faye, the Permanent Secretary Ministry of Defence Ndey Marie Njie expressed confidence in the preparedness of the troops. She pointed out that the training that the troops received will no doubt adequately prepare them for the multidimensional challenges in the contemporary peacekeeping environment which has been very dynamic and complex.

She advised them to always remember the confidence reposed on them as ambassadors of the Gambia Armed Forces in particular and the nation in general.

In a similar vein, The Chief of Defence Staff Gambia Armed Force highlighted some contributions made by the Gambia through deployment of troops to Darfur. He echoed messages of discipline, respect for diversity, professional behavior and the exhibit of the highest sense of being an ambassador of the Gambian people.

He said the Gambia has become an epitome of hope for the people of Darfur despite her size owing to the professionalism of the Gambian contingents. Furthermore, the season General Officer went down memory lane recounting his days in the mission area noting it is a pride and honour to serve humanity. He further stressed that the Gambia Armed Forces would therefore not tolerate any member found wanting of crimes relating to sexual abuse, theft or harassment of civilian populace.

He was quick however to note that the Gambia is widely respected in the United Nations missions around the world and that he has high hope on the men and women being deployed. Major General Drammeh premising on the enviable track record already established by the Gambian troops sent to Sudan over the years, on behalf of the His Excellency the President and Commander-in-Chief Mr. Adama Barrow, asks for the prayers of the nation as this rotation unfolds.