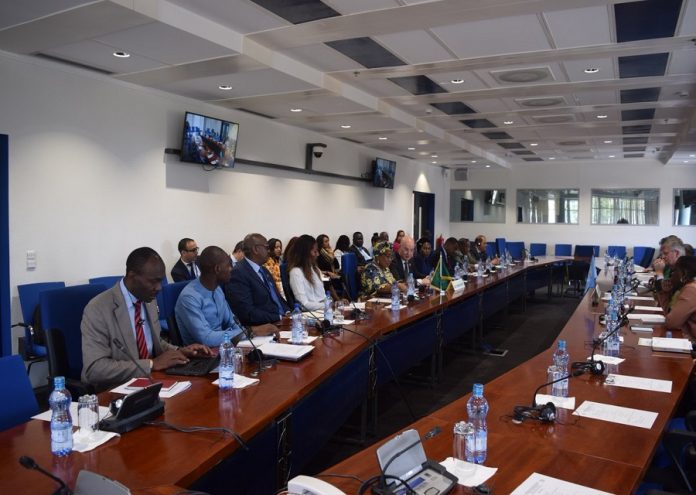 The African Union (AU) Peace and Security Council, has commended the The Gambia Government for its “relentless efforts towards consolidating democracy in the country, among others through the current reforms process, which will significantly contribute towards promoting stability, as well as economic growth and prosperity in the country”.

In a communiqué issued at the end of its 844th meeting held on 24 April 2019 on the Progress Report on Security Sector Reform in The Gambia, it stated:
“The Peace and Security Council, noting the remarks made by the Permanent Representative of the Federal Republic of Nigeria to the African Union, Ambassador Bankole Adeoye, in his capacity as the PSC Chairperson for the month of April 2019; the statement made by the Permanent Representative of The Gambia to the African Union, H.E. Ambassador Sulayman Alieu Jack; the presentation made by the AU Commissioner for Peace and Security, H.E. Ambassador Smail Chergui, as well as the statements made by the Economic Community of West African Countries (Eecowas) Permanent Representative to the AU, Dr Nelson Magbagbeola, and the Representative of the European Union (EU);
Also noting the significant progress being registered in the reforms process in The Gambia; and
Acting under Article 7 of its Protocol, the Peace and Security Council:
1. Commends the Government of The Gambia for its relentless efforts towards consolidating democracy in the country, among others through the current reforms process, which will significantly contribute towards promoting stability, as well as economic growth and prosperity in the country;

Also commends the AU Commission, particularly, the AU Technical Support Team to The Gambia (AUTSTG) for its commitment in discharging its mandate of providing technical support to relevant Gambian defense and security sector institutions in the area of capacity building, which has seen the country developing its first ever National Security Policy;
Further commends Ecowas for its continued support to the overall reforms and stabilization efforts being deployed by the Government of The Gambia, particularly in the context of Security Sector Reform (SSR);

Stresses the importance of the Government of the Gambia to play the leading role in the reforms process, on the basis of the priorities of the country, and to expedite decision making process on all aspects relating to the Defense and Security Sector Reform (DSSR), including the adoption of the National Security Council Act, as well as to coordinate the activities of various partners, working in close collaboration with the AU and Ecowas, with a view to further enhancing national ownership and sustainability of the reforms process;
Encourages the Government of The Gambia to draw lessons from, and emulate the best practices of other AU Member States that have successfully undertaken similar DSSR exercise;
Urges the Government of The Gambia to ensure gender mainstreaming in the SSR and other reforms processes;

Calls on the AU, working in close coordination with Ecowas and other AU Partners currently providing bilateral support to The Gambia, to redouble efforts in mobilising additional resources required by the Government of The Gambia for the successful implementation of all institutional reforms;
Also calls on all actors providing support to The Gambia to ensure coordination and complementarity of actions, with a view to avoiding duplication and distraction of efforts and resources, as prescribed by guidance documents and in line with both, the AU and Ecowas Policy Frameworks on SSR;
Underscores the need for AU Member States through the African Solidarity Initiative (ASI) to provide technical support (financial and in-kind) to the Defense and Security institutions of The Gambia;