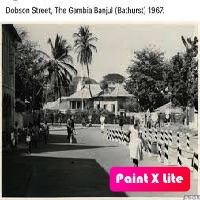 A citizen’s patriotism is a basic and fundamental ingredient for any country’s development and is measured by the moral exhibits of honesty, uncorrupt behaviors, trustworthiness and truthfulness in all dealings. Without this, development is unlikely to thrive. The Gambia, Banjul in particular, had structures that promoted the development of these good moral behaviours and patriotism; there is a compelling need to bring this into remembrance.

School children – Pupils and students presented themselves in starched and ironed school uniforms – the girls looking quite conspicuous with their natural braids (locally referred to as ‘marp’, ‘tallal’ or ‘dohdage’) They are plaited neat and beautiful. These dual features in their appearances taught boys and girls to be proud of their schools and to do everything to protect its image. They paraded solidarity and felt a strong sense of belonging to a specific institution. You dared not misbehave on the streets whilst putting on school uniform. If you did, anyone especially the strict parents, would just walk into the school and report you. Even if you could not be singled out, they would report the whole group and that would mean punishment for all of you.

School meals were provided during the short breaks and vitamin supplements added to enhance growth and health. Scoring high grades at public examinations as well as clinching medals at competitive sports on behalf of your school was a source of pride. Pupils competed to win and did so in a peaceful environment. A genuine spirit of togetherness was evident in the way pupils/students celebrated each other successes. Extra-curricular activities were embedded in the school activities; these included gardening within the school premises. The plants were useful for practical science lessons, food and nutrition classes. Some other extra-curricular activities included quiz competition, concerts, school singing competitions, and periodical picnics, visit to industrial premises, the National Library and listening to music by the Choral Union. Young students were encouraged to become members of formal societies or associations

Formal boys’ and girls’ associations included the Boys’ Scouts (1st Bathurst or 2nd Bathurst), Wolf Cubs, Girl Guides, Girl Brownies and the Red Cross. All of them had their specific uniforms that conspicuously and proudly identified them. All these Associations taught principles of good behavior, discipline, responsibility, punctuality and specific skills that were useful in community life. Boys and girls acquired much civic education by which to live by. Law and order were observed and respected by the masses. Communities were involved in bringing up the youths; it was not just the singular duty of parents.

Most, if not all of these youth organizations raised funds through ‘Bob-A-Job’. (Members of the organization would voluntarily do domestic work in private homes and would be given an amount of money for their effort.) This activity taught them to earn through hard work and not to be dependent on aid and charity. It was a lesson learnt very early in life and continued to adulthood. The moral of this was to believe and rely on hard work

Care for the youths – A ‘Youth Center” located at Allen Street and commonly known as Pa Club was made available for youths’ functions: holding meetings, playing indoor games and sports including table tennis, boxing and dance. Access to the center was free for all youths except when the facility was reserved for special events by a particular club.

The Social Welfare Officer, under the Department of Social Welfare, would register and organize social groups (both the young and elderly) to participate in regular national events showcasing unique skills; for example, regatta and boat racing.

Recreational sporting activities – A popular attraction was regatta and boat racing, football matches between professionals (e.g. between Nurses and Teachers and also between Marine and Sea Port Employees). Cultural carnivals and dancing competitions coloured this exuberant atmosphere. The Gambia High School was a venue for school net-ball and basketball competitions.

Recreation at night was provided by public film shows at the Mahoney Cinema Hall, Buckle Street; Ritz Cinema Hall, Fitzgerald Street and the Odeon Cinema Hall, Imam Omar Sowe Avenue. These entertainment facilities were patronized by people of all works of life. Weekend ‘afternoon jumps’ (youth dance) at Q Club, City Pride, Cheeta 2 (a boat night club), The Busy Bees (an evening club for girls where the Gambia School of Nursing & Midwifery was later built). Jazz. There were Jazz Band Shows at the Odeon Cinema that contributed to the ambience of social events.

Environmental sanitation –Banjul being an island prone to flooding and characterized by rising sea levels and stagnant water were favorable breeding grounds for mosquitoes. Drainage and malaria control measures were put in place to curb the spread. The presence of mangroves along the estuaries served as effective buffers against water intrusion and helped stabilize the soil. The ecology was favorable for oyster breeding and many women made their living harvesting and selling oysters along the Banjul-Serekunda highway.

The lifestyles that prevailed discouraged littering of streets. Many food packages were organic and drink bottles reusable. Women kept market baskets that would be washed daily to load fruits, vegetables, meat and fish. Banjul had three markets: the Albert Market, Lasso-Wharf and Musante. There were no need and use of plastic bags. Mineral water bottled from Oldfield Mineral Water Botting Factory at McCarthy Square, Farage at Hill Street and Daddy Jack at Picton Street all filled their produce in reusable bottles. These are routinely collected, washed and sanitized for reuse.

Safety and cleanliness; Banjul used to be quite safe and uniformed police offices in pairs patrol the city. Littering was strictly prohibited. Police patrol vehicles frequently drive along the streets thereby reinforcing the citizens’ confidence in the security services. The Banjul City Council (BCC) routinely cleans the streets and mechanical sweepers aided the laborers. Mosquito scouts would identify potential mosquito breeding places that would be treated with insecticides (larvicidal, adulticidal and fumigation). Health Inspectors from the Department of Medical and Health would inspect individual compounds and supervise the routine cleaning of drains and gutters. Banjul had the reputation of been the cleanest city in the region. BCC arranged regular collection and disposal of solid waste and excretal waste to a sanitary landfill located outside the city. Stray dogs would be captured and quarantine for a period of time and then destroyed if not claimed. Healthy dogs were vaccinated and issued with medal license fastened around the neck.  The Gambia contributed and was reputable in international research work in the fight against malaria and trypanosomiasis.

The McCarthy Square and State House– The McCarthy square was a popular center for social gatherings. It was the venue for march passes, public film shows, athletics, cricket matches and annual Christmas Carols. The square played a crucial role for fostering social bonding among Banjulians. It complemented the social functions of the State House by providing an assembly point for Boat Lanterns ‘Fanal’ on annual parade and contest at the State House. Such ‘fanals’ were designed in the shape of a boat, quite big, decorated with perforated papers of multiple colours and lit with candles. Uniformed sailors and a Ship Captain with a whistle made up the escort. Drum beating, cultural songs and joyous dance joyously gave spectacular atmosphere.

The State House also attracted Banjulians for annual horticultural and gardening exhibitions that offered attractive prizes. State House vicinity was accessible and the citizenry, including boys and girls, visit the Six Gun Batteries and Cannons and the state guards during Change of Guards Parade; these were exciting and colourful attractions.

France Independence Day celebration, 14th July, attracted and gave Francophone citizens residing in The Gambia, the opportunity to celebrate and showcase their culture. There was Camel parade, Petit Jallow with his calabash, Yeh Marigoh, Mamaparah, Kumpo, Bambagidah, Fatou Jamanah etc.  These were joyous cultural events been the binding elements of social cohesion amongst people living in the Gambia.

Construction of houses – Cement block houses were rapidly replacing the bamboo (kirinting) houses. At the time of constructing house members of the extended family willingly participated. The owner of the house would provide the building materials and tradesmen within the extended family would volunteer the labor. After fixing the roof the female members of the extended family (known as ‘suma jegen-yi’) would mount their flags on top of the roof prior to the placement of the roof cover, composed mainly of corrugated iron sheets. This was a proud display of their individual contribution. It would be accompanied with prayers and serving of delicious meal. The women that had their flags mounted would at the time of their removal bring gifts to the workers. The cost of erecting houses was much less due to the communal participation and influences of community elders.Status and responsibility of elders – In every ward in Banjul there were community elders that always mediate and resolve disputes before they are presented to the police or the courts. They commanded great respect and were concerned in all issues affecting society.

Bring back the good old days!!!! We miss the Ramadan evening meals, Christian children present at Muslim ‘Nafila’ and Muslims present at Christian celebrations, the ‘Talabone’, effigies of Judas Iscariot, ‘Nanburu’ and the masquerade ‘Agugu’ – ‘fulo’ and ‘pakin’ The older boys would throw some money to the ‘Agugu’ who is armed with a whip. The Agugu runs after them and whips anyone he catches; this was great fun and short distance runners emerged there from.