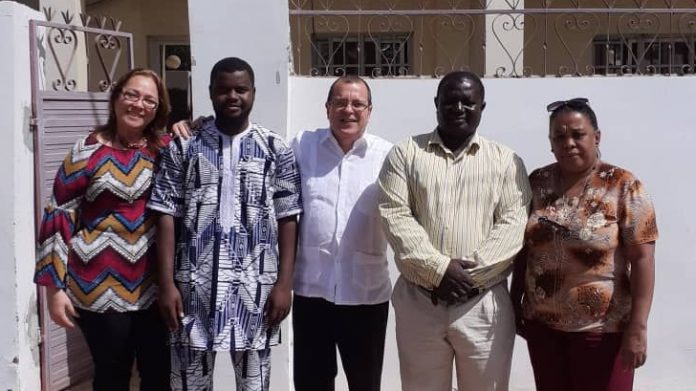 Banjul, Jan. 15 – The Ambassador of Cuba in The Gambia visited the headquarters of The Standard Newspaper yesterday, where he was received by its general manager, Salla Jeng, his Editor-in-Chief, Lamin Cham, and the staff of the print media, one of the most important in this nation of West Africa.

The diplomat of the Greater Antilles, accompanied by the head of the Cuban Medical Brigade (BMC), Anaris Martha Odio, spoke with his hosts about the historical relations that exist between the two countries, in addition to various topics of international interest, in general and about Africa, in particular.

The interlocutors agreed that the Gambia and Cuba are joined by solidarity, blood and cultural ties, and their respective peoples are lovers of peace and friendship.
They also highlighted the cooperation provided by the Caribbean nation to all Gambians in the field of health for more than two decades.

For his part, Ambassador Abelenda thanked the general manager and the Editor-in-Chief of The Standard for the cordial and emotional meeting held at the headquarters of the aforementioned daily.