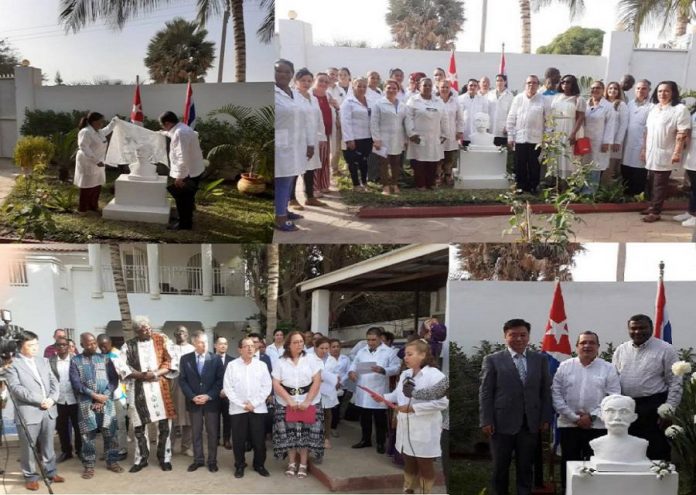 The Cubans who work in The Gambia are happier as of January 28th when for the first a bust of the National Hero of the Greater Antilles, José Martí, was unveiled on occasion of the 167th anniversary of his birth.

The sculpture, The Apostle, created by Gambian artist Francis Colmbegan Colley, was inaugurated on Tuesday at the Caribbean nation’s diplomatic offices in The Gambia.
In an emotional ceremony, one of Martí’s poems which addressed the fight for the independence of his country and region, and the relations between Cubans and Africans, was recited.

The event was attended by a representation of the Cuban Medical Brigade (CMB) in The Gambia, the Minister of Health Ahmadou Samateh, National Assembly Member Madi Ceesay, the Chinese Ambassador Ma Jianchun, the Turkish Ambassador Tolga Bermek, the president of the Gambia-Cuban Friendship Association, Modou Grant as well as Gambian graduates from Cuban universities.

White flowers were laid by the bust by Ambassador Rubén Abelenda and other dingitaries.
Poems as well as stories about the life of Marti were read in Spanish and English by the members of the BMC.

The ceremony was closed by Ambassador Abelenda, who cited several phrases written by the Cuban National Hero about Africa and Africans, including the following:
“There is in his horror and joy something supernatural and wonderful that does not exist in the other races, and he remembers in his movements and looks the majesty of the lion: there is in his affection a loyalty so sweet that he does not think of dogs, but in the pigeons: and there are in their passions such clarity, tenacity, intensity, which resemble those of the sun’s rays”.

Born in Havana, Martí began his political activism at an early age. He traveled extensively in Spain, Latin America, and the United States, raising awareness and support for the cause of Cuban independence. His newspaper Patria was an important instrument in his campaign for Cuban independence.He was a gifted writer and poet.