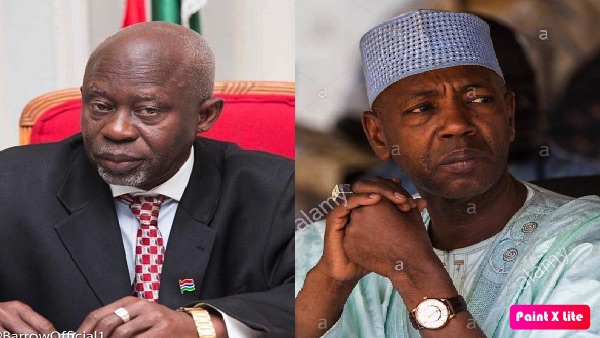 The leader of the United Democratic Party has warned against what he called the government’s plan to register non-Gambians on the pretense that they left the country to Senegal to search for land.

Ousainu Darboe’s comments came in response to Tourism Minister Hamat Bah’s recent claims that thousands of Gambians have left to settle in Senegal because of pressure on land to farm or graze.

According to Mr. Darboe, who did not name Mr. Bah, this is a plan devised to register non-Gambians as voters in the coming elections which he said would be stiffly resisted.

“When we were in the opposition, we fought against cross-border registration of voters but last week, I heard a minister saying that there is pressure on land in The Gambia and that pressure has resulted in Gambians migrating to Senegal. This is false and rubbish. I know they are preparing to register non-Gambians resident in Senegal on the pretense that these are Gambians who had left The Gambia because there is pressure on land in this country,” Darboe said in audio obtained by The Standard.

The former vice president continued: “There is no pressure on land in The Gambia that would warrant people to migrate and live in Senegal. I admit, occasionally, herdsmen take their cattle across the border for grazing but that is done periodically and they don’t completely migrate. They just go for a couple of months and return to the country. I believe the whole thing is a plan to start rigging the election by registering people who are living on the border on the pretense that they are Gambians who have migrated there. I want to say that this particular minister was one person who has himself been fighting and condemning the registration of non-Gambians who lived on the border villages. Let me make it clear that we are going to have our agents in every registration center in this country and we are not going to allow anybody coming from Senegal to register on the pretense that you have gone to Senegal because there is no land in this country. That is unacceptable and we are not going to tolerate it.”

Darboe also expressed concern about the issuance of national identity cards by the Immigration department in border villages.

“I am curious about the rationale to open a center for the issuance of ID cards in Fatoto while a place like Gunjur and my hometown, Bansang, which are very populous, don’t have a place for the issuance of ID cards. Why is this particular village on the border with Senegal prioritised as a center of issuance? Well, we are watching and are also watching the fast tracking of the naturalisation process of some foreigners. This is what Jammeh was doing all those years to rig elections but we are watching,” he warned.

Darboe also said the one-month tour of the president due to start on Monday has never happened in this country. “The Constitution has provided for the president to meet the Gambian people at least once a year to see for himself the impact government policies have on the people. But for the president to go for 30-days … that is a campaign funded by the coffers of the government thirty days will cost millions of dalasis and it is unacceptable. This president was elected to combat the misuse of incumbency but he is doing exactly what Yahya Jammeh had done, using state money go to communities asking them to come to the president to beg for their communities to be provided with development when he is elected to provide those developments,” Darboe said. He said no community should beg the government or the president because it is not the president who has the resources to give to the people. “The resources belong to the people and not the president. I have always said this of Yahya Jammeh and I will say it of Adama Barrow too; and that is, his father did not leave an estate which he could use to benefit people. The resources he is entrusted with are public funds and they should not be seen as him doing favors to the Gambian people with their own money,” he added.

Darboe also criticised the government for encouraging public officials’ participation in politics in support of Barrow and his NPP.

“You even hear some ministers who had fought against the past bad system now encouraging discredited practices like allowing public officials, governors and chiefs to support Barrow. But for us, we are preparing and God willing on 5 December 2021, President Adama Barrow will be shown the exit from State House,” he said.