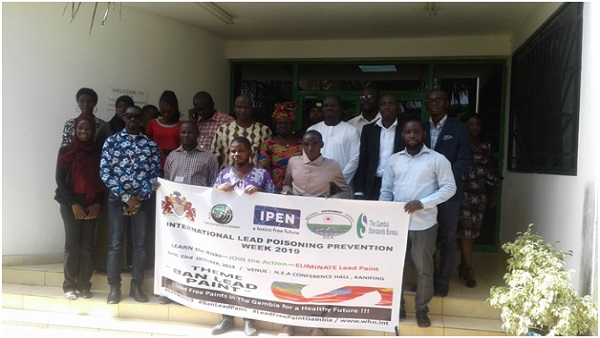 Environmental hazards of lead poisoning have claimed the lives of over 1.6 million individuals in 2017 alone, according to the chairperson of the Young Volunteers for Environment, YVE.

Isatou Ndow said this is according to the Institute for Health Metrics and Evaluation, a research institute.
The chairperson was speaking at a International Lead Poisoning Prevention Week 2019 under the theme ban lead paint.
Madam Ndow said exposure to even low levels of lead can cause damage over time, especially in children.

She said the challenge remains a key concern to health care providers and public health officials worldwide.
According to her, most Gambians are still unaware of the content of lead in paints that we use in our homes.
She assured that YVE would continue to engage key stakeholders during the campaign week which runs from 20-26 October with an aim to raising awareness on health effects of lead poisoning and the taking of measures to eradicate lead paint in the country.
“Even at low levels, the health impacts of lead exposure on young children’s brains are lifelong, irreversible and untreatable,” Mrs Ndow noted.

“We must act now to eliminate this critical source of lead exposure to young children,” she demanded.
She said developed countries have adopted laws to control the lead content of decorative paints, paints used on the interiors and exteriors of homes, schools, and other child-occupied facilities.
Dadou Trawally, the executive director of National Environment Agency, NEA, said as part of their awareness raising initiatives, in partnership with YVE, conducted a country survey on lead in solvent based paints for home use in with the support from IPEN.