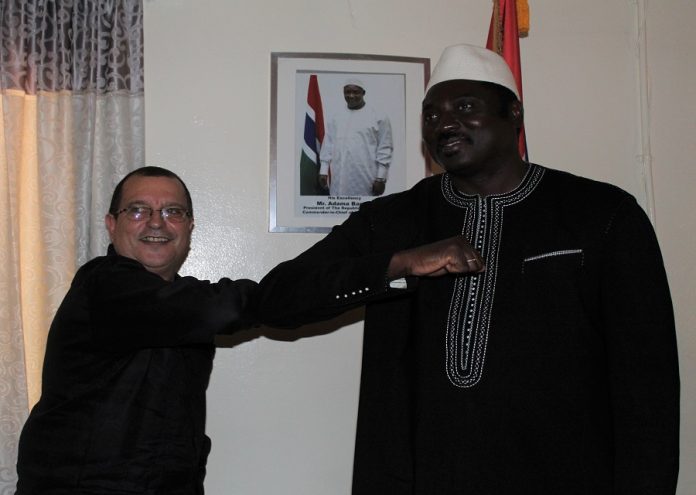 The Honourable Minister of Foreign Affairs, Dr. Mamadou Tangara, on Monday 6th July 2020 received the Ambassador of the Republic of Cuba, H.E. Sr. Ruben Abelenda, at his office in Banjul.

In his opening statement, Minister Tangara welcomed Ambassador Abelenda and commended him for the continuous collaboration and support given to The Gambia’s health sector by the Government of Cuba. Minister Tangara used the opportunity to commend Ambassador Abelenda for his relentless strides in strengthening the already cordial bilateral relations between the two countries.

The Foreign Affairs Minister informed Ambassador Abelenda of President Adama Barrow’s appreciation of gains registered in the strengthening of cooperation between the two countries over the years. He urged the Cuban Ambassador to use the opportunity to promote exchanges and collaboration between The Gambia and Cuba in various fields. Minister Tangara assured the Cuban Ambassador that relations would further be strengthened and support would be given to Cuba at all international fora.Minister emphasised that The Gambia’s position on Cuba remains unchanged.

In his remarks, Ambassador Abelenda thanked Minister Tangara for the support his country continued to get from The Gambia. He disclosed to Minister Tangara that the Government of Cuba has approved a scholarship package meant to train a group of Gambian doctors and nurses on Intensive Care as a speciality.
A host of bilateral and international issues bordering on cooperation were also discussed by the two sides.