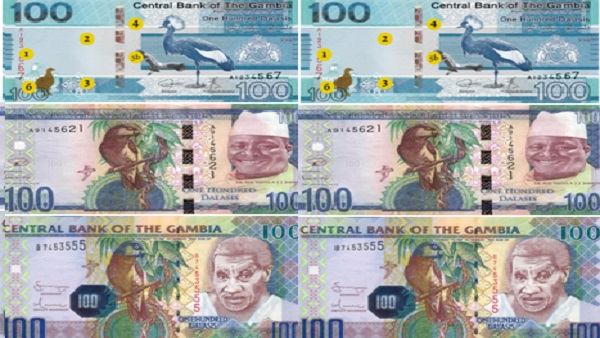 Having talked about the deadly coronavirus last week, a topic which has refused to go stale for various reasons, we briefly turn our attention today to a pernicious white-collar crime ravaging our already weak financial landscape.

But, as the norm of our mornings here at The Standard, let’s start with wise words from Sydney J. Harris: “You may work to fool the world of how genuine you are, but if your nature is false, your money appears as empty as your soul.”

The dalasi is beautiful. The coloring was creativity at its peak. But, like all other currencies around the world, it is vulnerable to manipulation by genius forgers like Frank Bourassa, who think the best way to make money is to create it yourself. However, just because we don’t seem to have that elite counterfeiting [hopefully] in the country, doesn’t mean we don’t have it at all. So let’s dive into our own endangered money species: The Dalasi.

The business of counterfeiting money is almost as old as money itself: Counterfeiting is sufficiently prevalent throughout history that it has been called “the world’s second oldest profession”. When paper money was introduced in China in the 13th century, wood from mulberry trees was used to make the money. To control access to the paper, guards were stationed around mulberry forests, while counterfeiters were punished by death. Nations have used counterfeiting as a means of warfare. The idea is to overflow the enemy’s economy with fake bank notes, so that the real value of the money plummets.

Is making fake money good?
No. That cannot be good. Some of the ill-effects that counterfeit money has on society include a reduction in the value of real money; and increase in prices (inflation) due to more money getting circulated in the economy – an unauthorized artificial increase in the money supply; a decrease in the acceptability of paper money; and losses, when traders are not reimbursed for counterfeit money detected by banks, even if it is confiscated.

Fraud fighting origins
At the end of the American Civil War, 1/3 of all American currency was counterfeit. There were 1600 different state banks designing and printing 7000 varieties of genuine notes, and 4000 varieties of counterfeits being produced. This situation led Abraham Lincoln to establish the United States Secret Service to combat counterfeiting.

The concerns of ECOWAS member states on means and ways to combat the menace in the sub-region have increased tremendously, but the loopholes still persist. The dodgy currency currently circulating widely in the Gambia should be of concern and looked into by the authorities. Setting up of Anti crime and other bodies such as the Financial Intelligence Unit responsible for receiving, analyzing requesting and disseminating financial intelligence to relevant authorities, are fine but sensitization on fake currency is lacking.

Counterfeit money is a problem businesses need to guard against on an ongoing basis. If a business accepts a fake bill in payment for merchandise or services, they lose both the face value of the bill they received, plus any goods or services they provided to the customer who paid with the counterfeit bill.

Fake D100 bills and 20 bills and how it works
Bureau, black market exchange – no machines to verify.
In addition to this Gambia is currently the only country with three different types of currencies in the same denominations in circulation;
(see image) 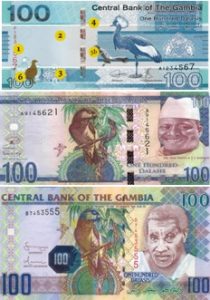 Counterfeiters use it to buy goods and services; the owners/ providers of these services have no means of telling the difference and flooding the market or in turn convert them to foreign currency. Imitations are printed on high quality banknote paper procured through extralegal means. As a result, counterfeit notes are often equal or even superior in quality compared to genuine money.

Men makecounterfeit money; in many more cases, money makes counterfeit men
— Sydney J. Harris
In addition to this, some counterfeiters use people to spread phony D10 and D20 bills to a wide bunch of business establishments. The business owners don’t take notice of the bills because the purchases and the bills are so small.

An individual making counterfeit money can print more currency than the gross domestic product of a small nation, but all the money in the world does not matter if that counterfeiter runs afoul of the law and ends up behind bars.

“bad boys, bad boys watcha gonna do when they come for you”
Printing counterfeit bills does not amuse the government of any nation, and the reprimands and punishments that accompany counterfeiters are not simple slaps on the wrist. But as countries fight this menace, how about homeland Gambia? Do we have any bullets?

The Gambia is not a regional financial center, although it is a regional re-export center. The Gambia derives most of its GDP from agriculture, tourism, remittances, and the re-export trade, with most transactions conducted in cash.

Counterfeiting countermeasuresor how to spot fake bills
The Central Bank of the Gambia Anti money laundering guidelines state;
Comparison: Compare the feel and texture of the paper with other bills you know are authentic.

Well-established security features include:
· A watermark formed within the paper – When held up to the light, the image is visible and will not produce on colour copiers; watermark with lighter area – the watermark of the crocodile’s head with a lighter area showing the note value and a stylised palm tree which can be seen from both sides of the note.

· High quality paper – Members of the public report that they recognise a banknote as a counterfeit by the texture of the paper; Print quality – The fineness of the print quality on a genuine banknote is difficult for current scanning equipment to resolve properly.
· Very Fine Lines – Very fine lines are visible on very close inspection, which will not be present in fakes.The characteristic raised print of genuine banknotes which can be found throughout the note but particularly the bars at the sides of the front of the notes.

· Microprint – Text is “micro printed” onto the bill. This is hard to reproduce without high quality printing equipment. On the 20, 50, 100 and 200 a green/red colour switch is added to the rainbow bars. The note value and images of the bird can also be seen.
· Color shift – Color shifting inks are used which cause the note’s colors to change when tilted.On the 100, the bush fowl in the bottom left hand corner is printed in a shiny ink that changes colour from gold to green when the note is tilted. On the 200 the shiny gold/green ink in the bush fowl also has a circular ring effect.

· Threads – Bills are printed with a security thread which is embedded in the bill rather than printed on it. The threads are clearly visible when the bill is held up to the light.
The latest design features and technologies are constantly monitored and applied where applicable.

Hold our banknote up to direct light and you will see its safety features. As Americans would say, if you are passed a counterfeit bill, you own it. So when accepting cash, it pays to be knowledgeable about the crime of counterfeiting. That will be all for this week. Please follow the CBG guidelines and let’s flush out all the fake bills. See you next week!