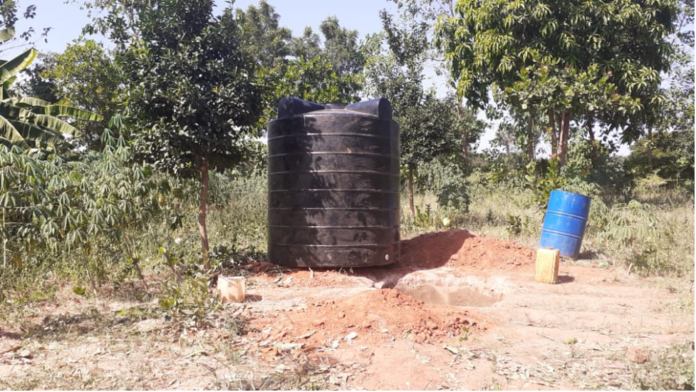 The community of Sanyang village in the Kombo South District has received 1000 bags of cement from GACH designed for the construction of a new car park for the coastal village.

The donated items according to the donor is worth over 300, 000 dalasis. Executive members from the old garage said the lack of proper garage where vehicles can park properly was among the top challenges the coastal village was facing.

Speaking at a presentation ceremony held over the weekend at the village, Abubakary Jawara, Chief Executive Officer of GACH, underscored: “Among my objectives is to always ensure that the challenges that Gambian communities are encountering are addressed. The government can’t do it alone; hence it’s the responsibility of all Gambians to partake in nation building.

“I want all Gambians to know that I am not someone who will destroy the country or any community in the country. As I always say, I want rapid development to come to the door steps of every Gambian. It’s also important as Gambians we support and embrace each other.”

According to him, since 1926 mining activities have been going on in the country and within the community of Sanyang. However, this is the first time a purely Gambian company is involved in the business, adding that since he commenced mining in the area, he has sponsored lots of projects in Sanyang and the country at large.

“Other companies were mining black sand in the area. They will take everything without even supporting the community where their activities were going on. For us, we have changed the trend. We will make sure that we support Sanyang community for whatever we can do as a company,” he said.

He added: “I have seen what other countries are doing and what their citizens are doing in their respective countries. Therefore, I thought as a Gambian I should also come back home and invest in the country. We will continue to strengthen our relationship with the community of Sanyang. I don’t want to see any community in The Gambia suffering.”

The development of the country in all aspects, he said, is among his priorities. “Currently, I employed more than three hundred Gambians of which am participating in reducing the rate of unemployment in the country. We are not only in to mining activities but even in agriculture among others.”

“I want to make it clear to you all that, my company will not destroy any garden in Sanyang and any other community in the country.”

Yusupha Jassey, secretary to the Sanyang Village Development Committee (VDC) thanked the CEO of GACH for his continuous support toward the development of the village for the past year. “Accidents were rampant at the old garage due to the fact that there was no space in the area. As VDC members, we feel it’s important to approach Mr. Jawara for support of which he didn’t hesitate to answer to our call.”

The village school, he went on, was hit with acute water shortage and school children find it difficult to have access to clean and potable water, claiming that it was Mr Jawara who helped them with borehole.

“It was even a no-go area to the garage especially during raining season due to the fact that water used to stagnate everywhere within the garage. Now with the new garage it will become history. These are the kinds of developments we need at the village,” Faburama Sarr, the president of Sanyang garage said.

Bintou Jabang, speaking on behalf of the Sanyang women, said: “Transferring the garage near the village market will go a long way in boosting the economic activities of the area.”