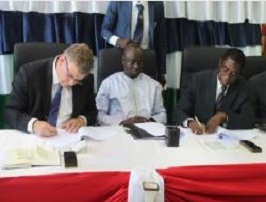 The Gambia government yesterday finalised a contract signed with oil giant British Petroleum some three months ago to explore oil and gas.

The A1 block was one of two that The Gambia government took from Norwegian-listed African Petroleum Corporation in 2017, claiming their license had expired.

Petroleum minister Fafa Sanyang and BP representative Jonathan Evans signed the deed of assignment at Petroleum House on behalf of their respective parties.

n the implementation of the licence. Signing these instruments is indeed an achievement but they just constitute the foundation,” Fafa Sanyang said shortly after signing the documents.

The A1 block is thought to contain close to a billion, if not more barrels of oil. It is not far from neighboring Senegal, where big discoveries have been made.

“The document we just signed today is a realisation of years of hard work, dedication and focus by the corporation and stakeholders in the petroleum industry,” Yaya F Barrow, the managing director of the Gambia National Petroleum Corporation remarked.

He said the finalisation of the deal triggers the achievement of not just the National Development Plan but the greater long-term vision of The Gambia.

“When GNPC was founded in 2003, it was created to be doing exactly what it is doing today; to take charge of government’s participation in industry development,” Barrow stated.

He said the entire negotiation process with BP, “even when difficult and tense, came with a lot of listening, understanding and respect”.

The potentials of Block A1 are quite high, according to Jonathan Evans.

“That is why we [BP] are increasing our footprint here in the sub-region. We hope to find some success for your country,” he said.

The Barrow administration said it is trying to build up The Gambia’s oil and gas sector as a way of reviving an economy gutted by more than two decades of tyrannical rule under former President Yahya Jammeh, who fled the country in 2017.