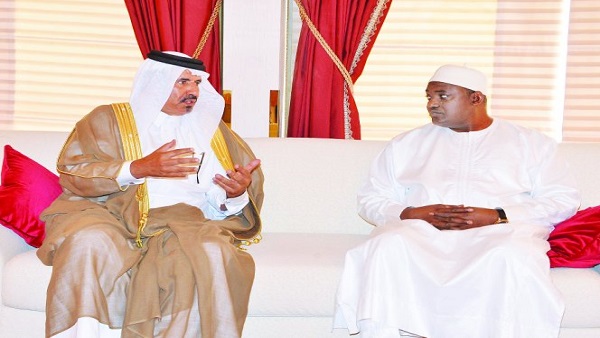 The President of The Gambia, Adama Barrow, called on Qatari businessmen to invest in his country and benefit from the opportunities it offers in various sectors in light of the attractive investment climate it offers.

The meeting touched on ways of enhancing trade relations between both countries and investment opportunities available in The Gambia.

Barrow praised Qatar’s economy and its preparations to host the World Cup 2022, affirming that this international tournament would attract large-scale investment opportunities to Qatar.

Al Kuwari welcomed the visit of the President of The Gambia to Qatar; expressing his hope this meeting represented a new beginning of developing cooperation ties between both the countries’ businesspersons especially that their trade volume is still weak, adding that to develop trade between both countries, this requires more cooperation between business sectors.

He noted that The Gambia has huge potentials in many key economic sectors such as agriculture, industry, services and natural resources such as fisheries, silica and titanium.

He added that these sectors are very attractive for Qatari investors who are eager to invest in Africa in general and in The Gambia in particular; especially that The Gambia sought to attract foreign investment thanks to investment incentives, new laws and easy procedures of doing business and facilitate investments.

He stressed The Chamber’s support and encourage all Qatari businessmen and companies to invest in The Gambia.

By Omar Bah One Ebrima Ceesay, a teenager, was last night stabbed to death in Bakoteh, just weeks after another man stabbed both his parents...
Read more
News

By Tabora Bojang Former prisons boss David Colley has been accused of involvement in the death of former APRC kingpin Baba Jobe, who was allegedly...
Read more
News

July 8, 2020
By Omar Bah One Ebrima Ceesay, a teenager, was last night stabbed to death in Bakoteh, just weeks after another man stabbed both his parents...