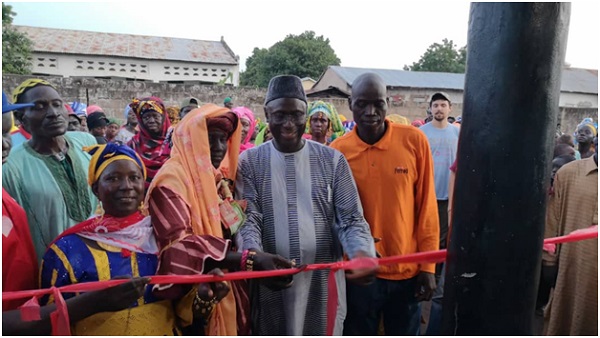 By Amadou Jadama in URR

The solar mill can be used for all types of cereals, such as maize, sorghum, rice and millet.
The brain behind the donation is Sanna Jatta, a former regional director at the Rome-based IFAD, and his wife, both natives of the village.

Other contributors to the project included 50 people from Italy, Belgium, UK and the United States.

“A total of EUR 6,900.00, equivalent to some D386, 000 was mobilised. It was used to finance a solar milling machine imported from the Republic of Spain.

We also constructed a D82, 000.00 building to house the mill and its solar panels, and funding the transportation to Sutukoba and installation of the mill by Gam-Solar Energy and Engineering Co. Ltd at an additional total cost of D60, 000,” he explained.

He said the idea to assist the women was conceptualised on one visit to the village with his wife, in January 2018, after they met a group of women who used traditional hand-milling methods to prepare their food daily.

“That manual milling process is time-consuming and arduous, depriving village housewives of valuable time to tend to other income-generating activities and household chores,” he said.

He said the purchase therefore, of a solar milling machine for the women will not only improve their living conditions but also enable them to use clean energy and produce zero emission of greenhouse gases.

“The present assistance is, in fact, a follow-up on a previous support provided by Mrs Yasmina Barka-Jatta and her husband for the purchase in January 2012 of a D20, 000 worth mechanical cereal milling machine for use by the women group in Sutukoba.

That machine was used by the Kafo for many years before it broke down.”

He said the milling machine is non-partisan, that is for the entire village to equally use and benfit from.

He called for greater unity among the villagers, assuring that many more developmental initiatives are in the pipeline for them.

“Remain united, live together in unison and harmony and support one another,” he advised.

One speaker at the event said meaningful development will come only when The Gambia has more Sanna Jattas.

“The country needs these types of people.

I want everybody to emulate him,” he urged.

Speaking earlier, Tida Sannoho, who spoke on behalf of the Jahakas, thanked the donor for the support.

She said the intervention was timely, and will ease the burden on village women.
She urged the people of Sutukoba, especially her fellow women, to continue to promote peace and unity in Sutukoba.

Kumuna Sidibeh from Sutukoba Health Centre, used the platform to appeal for help for the health centre.

“When there is no health, there can be no development,” she told the gathering.

Other speakers were Dansoding Touray, a women president, Janke Konoba, vice president and Aja Nyabally Jabai who all applauded Jatta and his team for their contribution.