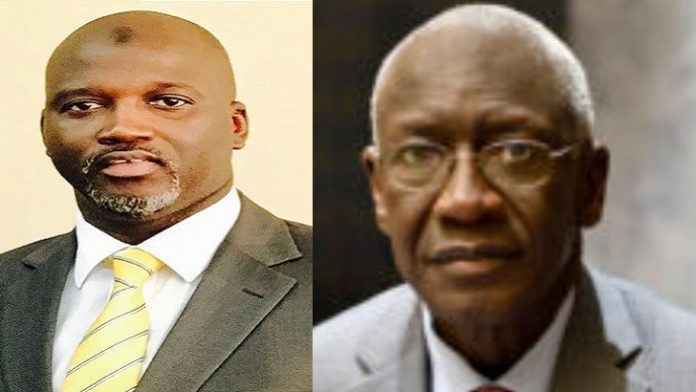 The Government of The Gambia has contributed D50 million to the TRRC’s Victim Support Fund.

The contribution was announced by Justice Minister Ba Tambadou at a press briefing held at the Justice Ministry’s conference room on Monday, October 7, 2019.

The funds will be deposited into the TRRC’s victim support account and will be administered by the Commission. In brief remarks following the Minister’s statement, TRRC Chair Dr. Lamin Sise welcomed the development and described the contribution as significant in helping the Commission fulfil its mandate.

He thanked the Justice Minister and Government of The Gambia for the timely intervention.

Also speaking at the event, Sheriff Kijera, Chairman of the Victims Centre recognized the contribution of the Gambia Government and the Ministry of Justice in particular for their concern for the victim community in The Gambia.

Below is the full text of Minister Tambadou’s statement to the press announcing the Government’s contribution.

Victims reparations statement
You will recall that pursuant to Section 13 and Section 20 of the TRRC Act, one of the key mandates, and a peculiar feature, of The Gambia’s truth commission process is the granting of reparations to victims by the TRRC itself.

In order to underscore the importance that the Government attaches to this objective, the word “Reparations” was included in the title of our truth commission, making it the first of its kind anywhere in the world.

Today, almost one year into the TRRC public hearings, the Government is fulfilling its promise to grant reparations for the victims of human rights violations and abuses within the mandate of the TRRC.

Therefore, on behalf of His Excellency, Adama Barrow, President of the Republic of The Gambia, and on behalf of his entire Government, it is with great pleasure that I announce to you, the decision of the Government of The Gambia to contribute to the TRRC Victims Trust Fund an initial amount of Fifty (50) Million Dalasis with immediate effect.

For your information, this Fifty Million Dalasis is being paid out from the proceeds of sale of former President Jammeh’s assets which are currently being sold in accordance with the recommendations of the Janneh Commission.

It has become increasingly apparent to the Government, based on revelations at the TRRC over the past one year, that former President Jammeh was a central pillar in the infrastructure of terror and human rights abuses that were unleashed on ordinary Gambians and others under his leadership.

Consequently, the Government deems it most fitting, and just, that reparations for his victims should be granted directly from his wealth and assets, hence the payment of this Fifty Million Dalasis from the proceeds of sale of his assets.

Let me also take this opportunity to thank all those ordinary Gambian men and women in the country and the diaspora for their individual and collective acts of generosity and altruism towards the welfare of the victims.

In this regard, I wish to thank many, in particular; Mr. Yunus Hydara in the United Kingdom for spearheading donation efforts for Mr. Mafugi Sonko and Mr. Yusupha Bojang; TRRC Lead Counsel Mr. Essa Faal for giving Mafugi a plot of land; Ms. Fatima Ella Bah of MOKI Aid, based in Manchester in the United Kingdom, for providing free technical and vocational education for the children of victims and making monthly donations to the TRRC Victims Trust Fund; Mr. Modou Jaiteh also based in Manchester for making monthly donations to the Victims Trust Fund; Mr. Papa Yusupha Njie of Unique Solutions for purchasing the air tickets to Turkey for two victims for medical treatment, providing housing for some victims’ families, and making donations of cash, radio sets, and mobile phones; Ms. Nathanya Deakin of the UK based charity called Anya’s Wish, for providing full scholarships for some victims to continue their education; Lamdo Sailey Sey, Oumie Andrews and all others who donated to victims of sexual violence; As well as the TRRC Secretariat for employing some victims in the Victim Support Unit, and for facilitating the medical treatment of victims overseas.

I would also like to particularly recognize the generous contributions of members of the Medical Board, which has been constituted since November 2018, through the provision of free professional services to victims, and they include:
Dr Charles A.P. Roberts – General Surgeon
Dr Kebba S. Marenah – Orthopedic and Trauma Surgeon
Dr Sheikh Tijan Senghore – General Physician
Dr Mustapha Bittaye – Obstetrician and Gynecologist
Dr John N. Jabang – Neurosurgeon
Dr Lamin Sidibeh – Clinical Psychologist
Dr Kalilou Jagne – Psychiatric Resident
Mr. Samba Bah – Physiotherapist
The Government is particularly grateful to them and countless others out there whose names have not been mentioned here today but who have been trying to make a difference and showing solidarity with the victims.

I hereby encourage and call upon everyone, especially private business enterprises in the country, to make generous donations to the TRRC Victims Trust Fund so that we can, together, make reparations meaningful for the victims who deserve no less than our individual and collective support to rebuild their lives. Let us, once again, demonstrate to the world, our true Gambian characters of benevolence, compassion, selflessness and humanity.

Let me also thank all the victims for their continued understanding and forbearance; and the Victims Center, particularly its Chairman Mr. Sheriff Kijera, for his continuous constructive engagement with Government through my Ministry, and for not only constantly reminding me about the urgent plight of the victims, but for also advocating for the general welfare and interests of all victims at every opportunity.

The payment of this Fifty Million Dalasis announced here today is significantly due to his tireless and relentless efforts and attitude. All the victims should be proud of him.

Finally, the Government also takes this opportunity to reiterate its continued strong support for, and firm commitment and gratitude to, the TRRC, all the Commissioners and staff under the wise leadership of the Chair, Dr Lamin J. Sise, for the great contributions they continue to make towards establishing the truth about our dark past and encouraging national reconciliation in the process.
I thank you all.