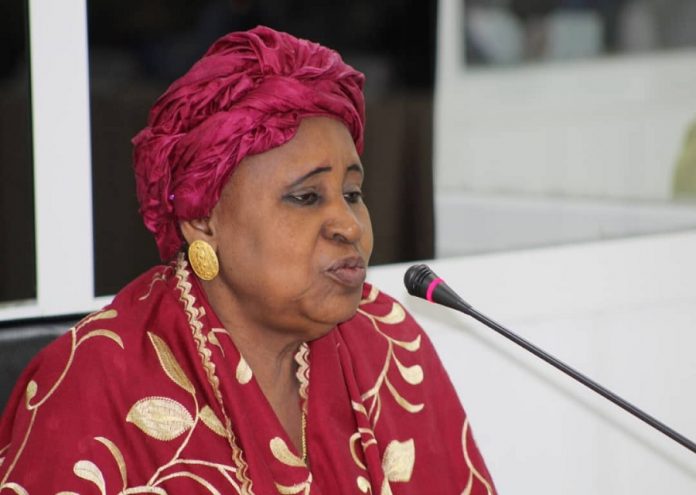 During two decades, from 1997 to 2017, she was the vice-president of The Gambia. The country’s leader was Yahya Jammeh, who had come to power in 1994 through a military coup. He was known for hiring and firing more ministers than any president in the region.

Yet, Isatou Njie Saidy seemed to have won his full trust. While being his vice-president, she kept holding the portfolio of Health, Social and Women’s Affairs. That made her the country’s longest serving minister and the most powerful woman under Jammeh.

On October 3 Isatou Njie Saidy appeared as a witness before the Truth, Reconciliation and Reparations Commission (TRRC). She was the last person to testify on the events of April 10 and 11, 2000, when fourteen students were gunned down by security forces for protesting the alleged rape of a student, Binta Manneh, and the alleged murder of another, Ebrima Barry.

Both victims had reportedly been assaulted by security officers. Nothing had been done about it. The students took to the streets, demanding justice, and they were met with brute force.

“Take care of the bastards in whatever way”
At the time of the events Jammeh was in Cuba. Saidy was the acting president.

According to the evidence before the TRRC, the authorities made efforts to brief the vice-president about the protest, and she briefed the president while he was in Cuba. Several people testified to this.

Lalo Jaiteh, Jammeh’s aide-de-camp, said that while in Cuba he had received a call from the protocol officer of the vice-president informing him that Saidy wanted to talk to Jammeh. The student demonstration had already begun.

“I took the phone to the president and while I was waiting at the door, I heard him say: ‘take care of these bastards in whatever way’,” stated Jaiteh, who testified via Skype from Switzerland where he currently lives.

Colonel Babucarr Jatta, the army chief at the time, testified that it was the former vice-president who ordered the deployment of the troops. Jatta even went on to say that by deploying the troops she knew that force would be used which could result in people being killed.

It was now time for Saidy to answer.

She presumably had a lot of stories to tell.

And she did eventually admit responsibility.

But on a lot of questions, she claimed not to have an answer.

She denied that what Jaiteh had heard – “take care of these bastards in whatever way” – had been passed on to her. “I know the ex-president often uses such expressions when he is angry but I don’t remember him saying that to me,” Saidy said. “Maybe he said it to the soldiers because I spoke to him and passed the phone to Colonel Babucarr Jatta.”

“I did not know anything about it”
Saidy said that even when she was the acting president she was not in charge. “Jammeh is a strong man and he does not leave security to anyone. He takes care of that himself,” she said.

She stressed that the decision to deploy soldiers was reached by the National Security Council at a meeting she chaired. She also claimed she didn’t hear about the death of the student protesters before a couple of days.

And so it was up to the TRRC lead counsel Essa Faal to expose the contradictions in the former vice-president’s testimony. Known for his tough questioning of high-value witnesses, this time Faal sometimes showed unusual tact.

“Isn’t it odd that the whole country knew about the death of the students but the vice-president only knew two or three days later? It is a serious disaster that you did not know what happened in the country.

“It is serious but it… happened,” said Saidy.

“State House was just next to the major hospital where people shot were taken. Isn’t this a case of selective memory?”
“No, I don’t know.”
“You sent the security to intervene.”
“No, we did not. They were to go stabilize the country.”
“But how were they to stabilize if they were not to intervene?”
“Well, they know best how to do that. Those were operational issues.”
“That is hard to believe, madam vice-president. There is a national emergency and all you told the security forces was to go and stabilize the situation without having any clue what they were to do?”
“I don’t remember saying: deploy forces.”
“But that is the problem. On all the critical issues, you don’t remember.”
“I know the Security Council agreed to deploy the army…”
“Didn’t you expect the army to use the guns to quell the situation? Did you expect the army to go there and say ‘calm down’ and everything goes away?”
“No, but these are operational issues. I did not know anything about it.”
“Babucarr Jatta said you ordered him to use his forces to go and quell the demonstration.”
“They [the security forces] advised me. I said ok. Go ahead.”
“And your decision was what was implemented by them?”
“Yes.”
“And they went and killed Gambians.”
“Well, I did not order them to kill the Gambians…”
“But you ordered for the deployment of the army. They used more guns and more people died. Do you accept responsibility for that?”

“I know it was wrong to indemnify the people who killed”
At this point, the confrontation became tense.

The soft-spoken vice-president was conceding slowly.

She was a bit emotional too and was raising her voice. For a moment the room got filled with silence.

Faal had prepared a list of ten kinds of violations that Jammeh is accused of. There were disappearances, targeted assassinations, witch-hunting, jailing political opponents and journalists, among others. The Commission’s chair, Lamin Sise, would later joke about the list as the Ten Commandments. Faal counted Jammeh’s atrocities as Saidy looked on. “You served a dictator who was killing his people,” said Faal. Saidy nodded and looked away.

She claimed she did not know about the Junglers, a notorious paramilitary unit.
“Did you last in Jammeh’s government for 22 years by defying orders?”
“Yes, I defied him sometimes…”
“But in all Jammeh’s speeches, you are always there nodding. He vowed to put people six-feet deep and you did nothing,” insisted Faal.

Saidy, appearing submissive, this time only said yes.
After the bloody protest, the government set up an inquiry. But while some low-level officials were interviewed, vice-president Saidy or members of the National Security Council did not appear before that commission.

The government did not hold anyone accountable for the killings. It even passed a law to indemnify the soldiers and paramilitary forces. Again, Saidy claimed she did not play any role in enacting this law.

“I heard the President [Jammeh] saying that in the interest of peace people needed to forgive on both sides,” said the former vice-president.
Faal’s tone shifted a bit.

“But isn’t that a lie? There was nothing to forgive from the students. They did nothing. You would not challenge the decision of the commission because it indemnified you,” argued Faal.

Saidy shook her head in admission. “I know it was wrong to indemnify the people who killed. It was wrong for anybody who killed to be granted immunity,” she said.

Putting the record straight
In the immediate aftermath of the student protest, Saidy had read a statement claiming there were people among the students holding guns.

Even the official inquiry rejected that claim. But she never admitted it or changed her original statement.

“The statement that you wrote was false,” Faal put to Saidy.
“I did not know it was false.”
“The evidence we have is that in your office it was discussed that it was false. Babucarr Jatta told us here.”

“No, I did not. I only knew it was not true after the coroner’s inquest.”
“So you concluded that the statement you fed the Gambian people was false. What did you do about that?”
“What could I have done about that?”
“You did something you knew was false and you did not correct that?”
“Ok. I am not here to argue.”

“But you have grossly misled the Gambian people.”
“But if I have to do that [correct the original statement which said students were carrying guns], I would have sought clearance from Jammeh.”

For many Gambians, the testimony of Isatou Njie Saidy before the TRRC was a big achievement. She did take responsibility and apologized to the nation and the victims. She requested for state and private individuals to help those of them who are still living with the wounds of the April 2000 incidents. But while some people were impressed, Abdou Karim Jammeh was not. A victim of the shooting, where he was hit on his left leg, Karim Jammeh watched the testimony from home.

“She was not honest and fair to us. She should have honestly and boldly come and accept responsibility,” he said in an interview with JusticeInfo. “She says she cannot remember almost everything but she could remember all the universities she attended and courses she did and jobs she took. So we are very disappointed.” One thing remained though: “It was a rumor that Yahya Jammeh ordered the shootings through Isatou Njie Saidy. Now it is clear to us. It is up to the Commission to do their conclusion,” Karim Jammeh said.