#IAmToufah makes the message clear: We are not going to wish the rape crisis away 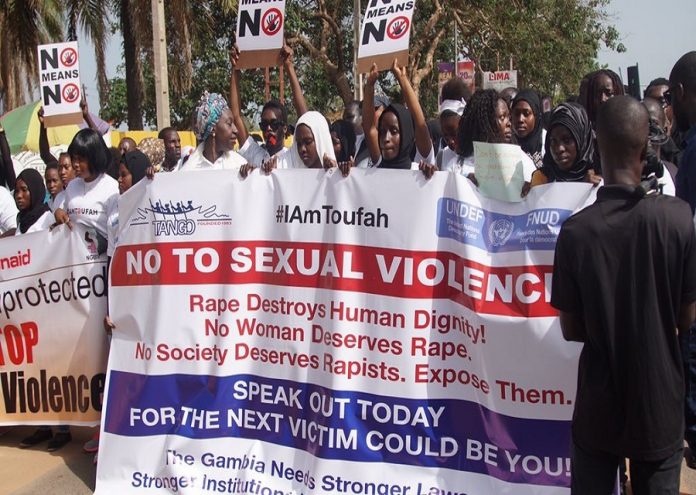 In dealing with past human rights abuses and upholding standards of respect for human rights, The Gambia’s transition from an abusive regime to democracy must also entail justice for victims of gender-based violence.

Toufah detailed her story from the starting point of winning the state-sponsored beauty pageant in 2014 when she was 18 years old.

Over the next few months, Jammeh lavished her with cash gifts and other favors including installation of running water in her family house.

She was offered a position as a “protocol girl,” to work at the State House, which she declined. She also turned down his marriage proposal.

During a pre-Ramadan Quran recital at State House, Jammeh locked her in a room and told her: “There’s no woman that I want that I cannot have.”

She said that he then hit and taunted her, injected her with a liquid, and raped her.

Fatoumatta Sandeng, the spokesperson of the “Campaign to Bring Yahya Jammeh and his Accomplices to Justice” (#Jammeh2Justice campaign), and daughter of Solo Sandeng, whose murder in custody in 2016 led to a rallying call against Jammeh was also confined to a hotel in his home village Kanilai for several days.

She was a well-known band singer and had caught Jammeh’s eye when she performed on TV. She was released unharmed due to Jammeh having to attend a funeral.

These public allegations against Jammeh, of coercing and forcing young women to have sex with him, form part of a core focus of spotlighting the issue of rape and other sexual crimes during his rule from July 1994 to January 2017, in efforts to prosecute him.

The Gambia Truth, Reconciliation and Reparations Commission, which is currenting establishing the nature, causes and extent of violations and abuses of human rights committed during the period July 1994 to January 2017 will be a vital platform to establish the systemic abuse of young women by Jammeh.

The creation of a movement
Following the public rape allegations against Jammeh, The Gambia’s #MeToo has been triggered.

Women, both in and outside the country, shared their own experiences of sexual assault leading to other hashtags such as #SurvivingMelville.

This widespread response highly accentuates the demand for accountability and justice.

The Women’s Act 2010 defines violence against women to mean:
all acts perpetrated against women which cause or could cause them physical, mental and emotional, sexual, psychological or economic harm or suffering to women, including the threat to take such acts, or to undertake the imposition of arbitrary restrictions on or deprivation of fundamental freedoms in private or public life, in peace time and during situations of armed conflicts or of wars.

The #IAmToufah movement displays the incredible strength and courage of women and girls to talk about sexual violence.

However, the public debate about sexual assault quickly led to denunciation by rape apologists of the “so-called victims” as “liars and people to be blamed, not the rapist”.

The urge to brand the victim as a willing collaborator is unfortunate but not bewildering, especially given the Gambian context.

What the harsh judgment and victim blaming show is society’s complicity in silencing and stigmatizing victims of gender-based violence, including rape.

The movement’s oppressors
Ironically enough, some of the fiercest denialists are actually women/young women.

This conformity to societal expectations is illustrative of the way systematic domination renders these women incapable of understanding their participation in and reinforcement of their own oppression.

The denialist attitudes held by people in The Gambia reflects the national rhetoric on rape, contested understanding of ‘consent’ and the patriarchal nature of the society.

Rape should be understood not just in terms of the harm that individual victims suffer, but as a pillar of patriarchy: a central part of many cultures in The Gambia.

Patriarchy is “the systematic, structural, unjustified domination of women by men.

It consists of those institutions, behaviours, ideologies, and belief systems that maintain, justify and legitimate male gender privilege and power.”

(Braam & Hessini 2004). Rape is not just about sexual desire; it becomes a way of discipling women when men believe there is a challenge to their masculinity or when women do not exercise their traditional female roles.

Gender-based violence is one of the most pervasive forms of human rights violations perpetrated, mostly against women and girls.

It is therefore appropriate that we demand for justice. According to the 2013 Gambia Demographic and Health Survey (DHS), 4.6% of people aged 15–59 had experienced sexual violence in the 12 months preceding the report.

On July 4, 2019, hundreds of women and men, boys and girls marched in solidarity demanding that government and society take concrete action to end gender-based violence in The Gambia.

What was out there on the streets was a moving mass of action giving voice to rage. They carried placards with words that seethed.

This national discourse and reflection on the ongoing problem begs the question:

Why does the culture of rape continue?
The culture of impunity that has perpetuated our society for the past two decades serves as the foundation for the lack of justice for survivors of sexual violence.

While there is no national figure on the prevalence, we do know that sexual abuse is often commonplace for women and girls in The Gambia.

Victims maybe afraid to report violence, especially if the person who has hurt them is more powerful or is in a position of trust and authority and could harm them again.

Given the nature of Gambian society, victims are afraid of societal condemnation and stigma making them reluctant to report.

The state is deemed to condone or perpetuate violence when it does not effectively implement laws that protect women and girls from violence, effectively allowing impunity.

When the state does not hold perpetrators accountable, it sends a signal that male violence as a mechanism of control over women is acceptable, thereby leading to normalization of the violence.

The socio-cultural system serves as the foundation that entrenches and perpetuates these sexual crimes.

There is a general social acceptance of violence and perpetuation of inequality.

The Gambia is a deeply patriarchal society, which creates unequal power relationships between men and women and maintains gender stereotypes.

Gender stereotype is defined as “a generalised view or preconception about attributes, or characteristics that are or ought to be possessed by women and men or the roles that are or should be performed by men and women.”

(Cook and Cusack, 2010, p.9). Rape is part of the patriarchal system in the Gambia that promotes low status of women.

Whilst women constitute more than half of the Gambian population, society does not equally value women and girls.

As noted elsewhere “[a]t the heart of gender inequality lies unequal power relations between women and men in our societies, where men control and dominate over women’s lives.”

What will it take to address the issue?
While we have laws and policies in place, it is vital that we ensure effective.

enforcement mechanisms are in place. This would include the strengthening of the justice system and the police to deal with cases expediently as victims need to be provided with just and effective remedies.

Perpetrators of all forms of sexual violence should be prosecuted and punished.

In addition to the provisions in the abovementioned laws, the new Gambian constitution must constitutionalize the prohibition of violence against women and girls in both the private and public spheres).

Constitutions serve as important frameworks for articulating a State’s condemnation of violence against women in line with international standards.

The inclusion of such a constitutional protection will be premised on the basis that gender-based violence violates the fundamental rights of women and limits their opportunities and choices.

The state is also obligated to prevent women’s rights violation by state (such as the police or military) and non-state actors (such as spouse, partner or employer) for the attainable of equality in all spheres.

Equally important, civil society organisations need to collectivize efforts and continue to challenge attitudes and stereotypes that engender GBV and perpetuate the subordination of women and the unequal distribution of power between women and men. Assertions of culture and religion cannot be continually used to justify violations of women’s rights.

What the #IAmToufah brings to the table is not just a viewing of women and girls as victims of violence but spotlighting the abusers who must be named, shamed and brought to face justice.

#TimeIsUp as Gambia makes the choice by taking a stance to not tolerate, condone or excuse sexual violence committed against women and girls.

It is time we stop finding excuses for rapists.

Rape is never acceptable, and perpetrators will not go unpunished!

This article is republished from Impakter.

Satang Nabaneh is a doctoral candidate.