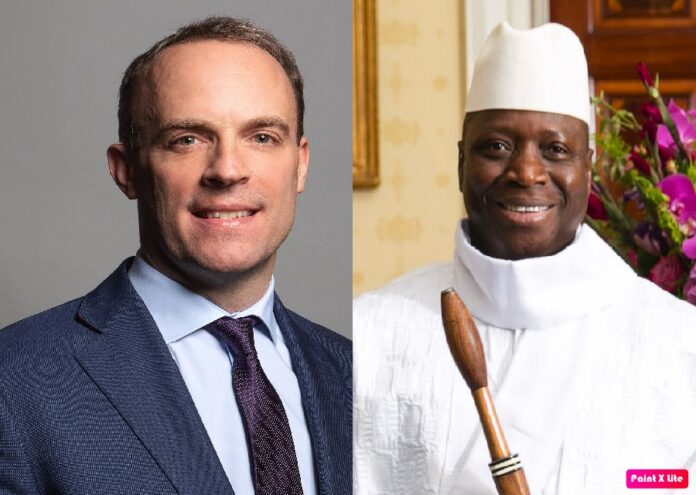 The United Kingdom has announced it is imposing asset freezes and travel bans on former President Yahya Jammeh and his associates for being responsible for some of the ‘most egregious’ human rights violations.

“We’re imposing asset freezes and travel bans on individuals and organisations in Venezuela, in Russia, in The Gambia and in Pakistan. In Venezuela, we’re placing sanctions on the military and police commanders responsible for the use of lethal force during peaceful protests that led to the deaths of demonstrators,” Dominic Raab, UK foreign secretary,  announced in a one-minute-and-fifty-eight-second Twitter video on Thursday as the world marked International Human Rights Day.

In The Gambia, Raab added: “We are targeting the former president and his associates, who were responsible for a wide range of serious human rights violations including extrajudicial killings, enforced disappearances, kidnappings, torture and even rape.”

“There should be justice for these kinds of human rights violations and the United Kingdom has a role to play but we also know that these sanctions are most effective when they are backed off with coordinated and collective international action. So we are working with our international partners to achieve those objectives,” he added.

The UK introduced its first Global Human Rights Sanctions regime in July to hold to account those involved in serious human rights violations around the world to send a clear message to those with blood on their hands and those trying to profit from such crimes.

In December 2018, the United States also banned Jammeh and members of his family from entering the country. The former ruler is also banned from holding public office in The Gambia for the rest of his life.