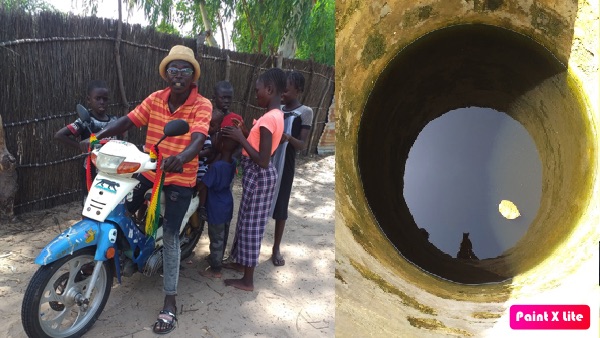 As Ebrima Sanyang pulled out his motorbike from his cramped living room, dozens of kids gathered around to cheer him on. But the 47-year-old was in no mood to entertain them.

“I am going to Barra to fetch water for my family,” he told me as he knelt beside his motorcycle, sweating profusely under a scotching sun.

He tucked four 5-litre water gallons at the back of his bike, turned on the ignition and sped off.

Ebrima is a native of Jinack, an island in the North Bank Region that hosts four villages. Two of the settlements are in Senegal while Kajata and Niji, where Ebrima lives, are in The Gambia. The two marijuana-farming villages number at least 2,000 inhabitants.

Rich in vegetation and wildlife, the place is known among tour operators as ‘Paradise Island’. Here, tourists can listen to bird sounds, swim in the low-tide waters or play with dolphins, bask on the beaches and do sport fishing or nature treks.

However, these enjoyments have eluded the villagers who lack a basic necessity of life: safe drinking water.

Ebrima said that for the past five years, he travels seven kilometres to Barra at least five times every week to get potable water. The village has no proper road network and it is not connected to the national electricity grid.

It didn’t use to be this way

The settlements used to have access to clean water, for many decades, thanks to locally dug wells. However, the well waters have either dried up, turned yellowish and are no longer safe for use. Villagers blamed climate change and the now highly salinated nature of the island.

“A lot of people, including myself, fell sick here as a result of drinking from these wells,” 40-year-old Ebrima told me. “No one here can use the water because it leads to all kinds of stomach problems.”

That is why Ebrima, like the rest of the villagers, must travel kilometres to provide water for his family. I sat by his sandy compound gate for more than five hours, anticipating his return. He reemerged later that evening but without his water containers.

“I found that the taps were closed and I was told that water would be available from 8 pm,” he said, clearly disappointed. I would have to go back for the water tomorrow, so I left the containers there.”

The weed farmer has a wife and four children, but with no water to address their basic needs, how they would get by for the day is anyone’s guess.

“This is not the first time my family and I go to bed without sufficient or no water,” he lamented.

With limited job opportunities, most natives turned to farming but, unlike Ebrima, not every farmer can afford a motorcycle.

“Many people here contract vehicle owners, and others would contract boat operators, and would pay them a lot of money to fetch their containers when they travel to Barra,” shopkeeper Alagie Touray explained.

Sitting under a neem tree in front of his poorly-stocked provisions shop, he took a sip of his attaya (Chinese green tea), puffed on his weed, and leaned back in his wooden chair.

“We have been in this state since the Jammeh days,” the 58-year old father of 12, rued. “Now, with Barrow, too, all signs are that nothing will happen.”

Earlier that day, Touray had sent his 22-year-old son to fetch water in Barra, but he was saddened to see him return from the thick bushes with empty water containers, dragging his motorcycle.

“My eyes are red,” he said looking at his son. “He didn’t have it [water] but that’s not uncommon,” he added.

In 2015, the two villages put together a 12-man delegation and visited then vice president Ousainu Darboe, who they said promised to do something about their predicament.

“This was on a Friday, in his office in Banjul” Niji Village Development Committee chairman, Ousman Jatta, explained. “The following day, President Barrow was supposed to travel. Darboe promised us that the government would do something about it. He promised to inform the president. He even promised to call for a multisectoral meeting and talk to a whole lot of stakeholders.”

However, Jatta said to date, nothing has happened.

The chairman also spoke of a charity that took steps to bringing a water project for the two villages.

“The idea was for them to liaise with Nawec and provide us 24 hours water supply”. But that didn’t work, and the chairman would not elaborate. There were those who said differences in approaches between the two villages was the stumbling block.

The villagers also looked to advocacy, launched radio shows, and engaged the Gambian diaspora however, all efforts proved futile. “Promises were made but till now nothing has happened,” Chairman Jatta said.

What did the authorities say?

The Ministry of Fisheries and Water Resources is the government policy institution responsible for these issues, and its mission statement reads: “To monitor the weather and climate in order to harness their positive impacts and to provide lead-time information for protection against negative impacts; develop and maintain rational and judicious exploitation and use of the national surface and ground water resources and fish products, guaranteeing a healthy, decent and sustainable standard of living for all, now and posterity.”

Sadly, it is the opposite with the people of Coconut Island, as Paradise Island is also sometimes referred to.

“The salination there is so high, that’s one of the issues,” fisheries minister James Gomez said.

He added: “[But] I can tell you, that place is a government priority. The technicians are right now looking at how a borehole can be constructed. It’s not a one-day business but there is a plan, and hopefully, in the next couple of weeks we will get something [done about the issue].”

But not everyone has bought into those assertions. The National Assembly Member for Lower Niumi, Matarr Jeng, said the Barrow administration has “absolutely” no plans for the island’s water issues.

“When President Barrow came to Lower Niumi as part of his Dialogue With the People Tour last year, I had the privilege of having a bottle of water from Jinack but after drinking, it just occurred to me that the people of Jinack were not drinking anything healthy. It was a bad water,” the lawmaker said.

From that day on, he said he had to send 20 litres of water every week to an alkalo of one of the villages.

Indeed, the lawmaker has been vocal about the problems of the island, and has on several occasions attempted to draw attention to the plight of the people of the island.

He has been speaking out but it seems no one has been listening, or at least doing something. And until they do, Jinack remains a paradise athirst.

Alagie Manneh is a multiple award-winning sub-editor, columnist and senior journalist at The Standard newspaper.