Keeping them honest and accountable: 20 key promises of Coalition Manifesto 2016 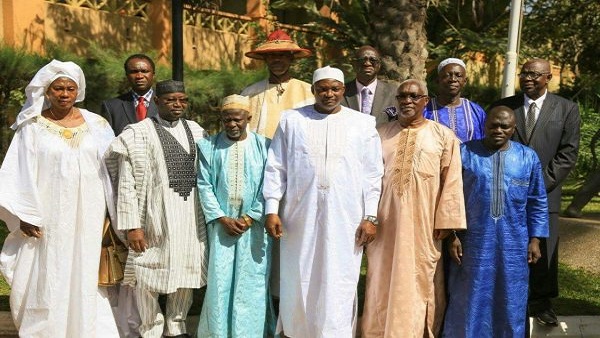 Here are 20 key highlights of the promises contained in the Coalition Manifesto 2016. It is this manifesto that Candidate Adama Barrow backed by seven coalition political parties and the independent candidate Dr Isatou Touray sold to electorates to vote for them into power.

20 key elements of the Coalition Manifesto
1. Coalition candidate Adama Barrow will serve for only three years at the head of a broad-based and inclusive coalition government aimed at conducting constitutional, institutional and administrative reforms;
2. The coalition government would work towards delivering quality and relevant basic education that is free, accessible and compulsory.

3. Primary health care (PHC) focusing on the basic health needs of the population will be the basis of the health delivery system of the coalition.
The transitional government shall treat all Gambians equally regardless of gender, political, religious and tribal affiliation and shall respect and protect the fundamental principles of humans and people’s rights;
5. The coalition government shall establish a body of jurists and competent personalities to review the constitution with a view to cleansing it of all provisions which are inimical to democracy and the rule of law;
To make NAMs accountable to the electorate, an Act of the National Assembly shall be enacted to provide the procedure to enforce Section 92 of the Constitution which provides the right to recall representatives to the electorate.

A Freedom of Information Act shall be enacted to strengthen media oversight.
An NGO Act shall be enacted to promote civil society oversight.
The coalition government shall open the public media to divergent views and opinion as required by Section 208 of the 1997 Constitution.
The coalition government shall repeal the legal requirement of political parties having to apply for permits before using amplification facilities and instead introduce a consultative mechanism that enables the police to determine which party has the user right to a meeting place on a first come first serve basis.
The coalition government endeavours to propagate legislation to revoke all provisions of a law criminalising speech including libel, sedition, false news and false publication within six months of assuming political office.

The coalition government states that the Public Order Act gives too much power to the Inspector General of Police and does fetter freedom of association and assembly. The coalition government will repeal any provision in the Public Order Act which is not reasonable and justifiable in a democratic society such as those which hinder peaceful procession to highlight public grievances which are the main tool for exercising civil society oversight over the governance process.
The coalition government shall repeal Section 114 of the Criminal Code which relates to giving false information to a public servant. The coalition recognises that Section 25(f) protects the right of every person to freedom to petition the executive for redress of grievances.

14. The coalition government will enact a freedom of information law in consultation with the GPU and the media fraternity to enhance access to official information and strengthen media oversight of governance. This will facilitate transparency and accountability.
15. Within a month from assuming office, the coalition government will set up a commission of inquiry into the places and conditions of detention before and after conviction with the objective of putting an end to torture, rape, inhuman and degrading punishment or treatment and poor conditions of imprisonment.
16. The coalition government shall grant general amnesty and release all those jailed in relation to charges of treason, false news, false publication, sedition, libel, Public Order Act offences, giving false information to a public servant.

Protect civil servants and disciplined forces from being used for partisan political objectives.
Empower the National Council for Civic Education (NCCE) both in terms of human and financial resources for them to become more apt to conduct civic education programmes on a nationwide scale.

19. The coalition government and its agencies will respect and uphold human rights as provided in the Constitution, Ecowas and AU protocols and international conventions.
20. The coalition government will conduct civic education on print, electronic i.e. radio and television, social media and any other outlets, singly or in collaboration with other stakeholders, to promote tolerance of diversity and national reconciliation.
These and many more are the promises contained in the Coalition Manifesto 2016. Until citizens are familiar with this manifesto and use it to monitor the coalition government and coalition political parties The Gambia shall continue to be a victim of poor governance, weak leadership and increasing poverty and underdevelopment.

There cannot be system change until and unless the provisions of this manifesto are implemented. Let us demand that President Adama Barrow implement this manifesto. Where he fails to do so, let us demand that our political parties use their representatives in the National Assembly to effect system change by reviewing and repealing existing laws as well as creating new laws and using their full powers in the constitution to discipline the executive which is already notorious for abuse of power!
Read the full manifesto today and start fulfilling your constitutional duty of holding elected and appointed public officials and public institutions accountable.