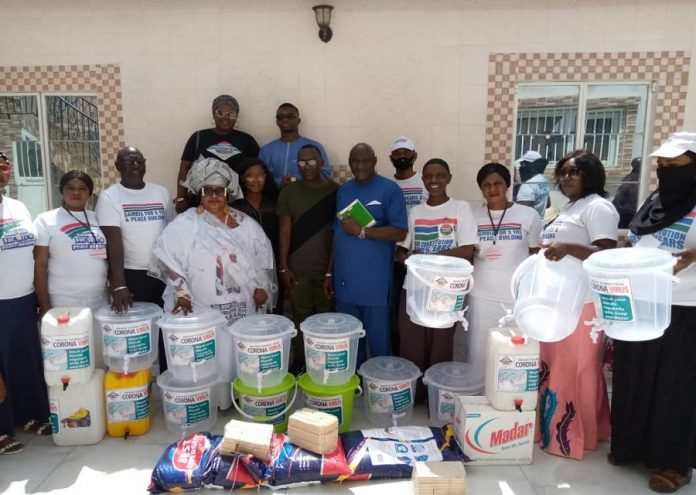 Top real estate giant Kombo Real on Friday partnered the Suso Foundation to distribute D50,000 worth of cash and materials to three volutary groups in the fight against Covid-19.
The materials including quality water buckets fitted with taps, soap, detergent liguid and among others went to the Sukuta Covid-19 Task Force, Gambia for Five Years and Peace Building as well as the Fabakary Ceesay Fan Club.
The package was solicited by Musa Suso, through his Suso Foundation with Kombo Real Estate bankrolling it.

Speaking at the ceremony Sana Jassey, the CEO of Kombo Real Estate said the initiative is a simple implementation of his company’s corporate social responsibility. ”At Kombo Real we realised that business is not just about collecting profits but to plough back those resources to the communities in terms of emergencies such as the Covid-9 pandemic. It is with this realisation that we are today responding to the great idea initiated by Musa Suso and his foundation and we hope that the packages will be used by the beneficiaries to reach the larger community”, Jassey said.

According to Musa Suso, the CEO of the Suso Foundation who is also the deputy Governor of the West Coast Region, the three beneficiaries are frontline volunteers whose single objective and collective mandate is to help eradicate the coronavirus in The Gambia. He thanked Kombo Real Estate for responding to his Foundation’s idea by providing the items and cash for the three groups.

Ibrahima Sorrie Bah of the Gambia for 5 years and Peace Building said unlike many people’s belief his organisation is not just focused on politics but in addition to its belief to defend the constitution, the organisation is also a civic society organisation ready to participate in any meaningful national programme. ”This movement has been able to mobilise over 150,000 people from home and abroad to its objective of standing for the country’s constitution and development and the fight against Covid-19 is one such noble activity,” he said while promising to use their network around the country to spread the items.

Buba Cham of the Sukuta Village Development Committee thanked both the Suso Foundation and Kombo Real for the gesture and assured the gathering that with this help, his youth wing will implement the anti-covid campaign more effectively. Fabakary Ceesay, whose fan club has over 200 members expressed similar sentiments.