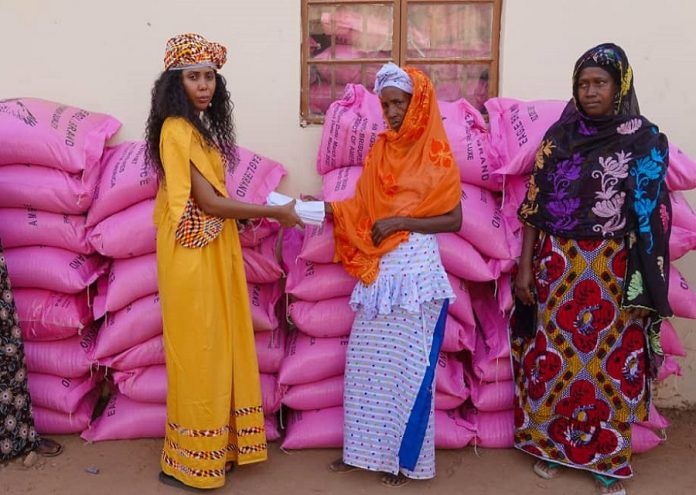 L’orel Paris Ambassador, Jaha Dukureh, who doubles as the founder and executive director of Safe Hands for Girls and the UN women regional ambassador for Africa on Thursday donated 2000 bags of rice to beneficiaries in URR to support vulnerable families during Ramadan and also curb COVID-19 pandemic.

Speaking, Jaha Dukureh, said with her new L’orel endorsement, she would like to start an emergency base income program for women in The Gambia.
While speaking during the donation held in Rumba Village, Dukureh unveiled to the press about her plans to work with women-led households.
She and her entire team are working on a system of supporting vulnerable women in URR and the entire country in the near future with an amount of D250 every month for a period of 3 years.

She said they are doing this to bring down the level of poverty in the communities and to help empower women because they realise that women are the most vulnerable in the society.

“I don’t have the answer for everyone but I do want to use this platform I just have and this new resource to help as much as I can,”she said.
“I have heard and seen lof of comments online that are not true about me but at the end of the day, I am standing on my truth. I know that I have no intention and the reason why I am doing all this donation is because of my late mother.”
She added that the 4 million dalasis invested is from her own account.
She urged the young women of the country to believe in themselves and to realise that everything in life is possible.

Mam Lisa Camara, national coordinator,Safe Hands for Girls, said they have been doing this kind of donation every Ramadan but Jaha has never given such a huge donation of rice before.

“We go to villages every Ramadan to give out rice and money but this year,it is big because of the Covid-19 and she actually knows that women are going through a lot in these trying times.That’s why she came up with such a huge donation,” she explained.
According to Camara, the first phase was done in Kiang West and Jarra Sankuya in (LRR), Farafenni, Conteh Kunda, Darurlilwan (NBR), Gambia Ara, Basse and Badareh (URR) and some households in the KMC with over 1000 bags of rice and cash amount of D500 dalasi for each.

She also said Jahaplans to extend her support to needy communities in Foni, Kombo South and Upper Nuimi in (NBR) with over 1000 bags of rice as well.
Alagie Jarju, the program manager NYC, said they did the assessment and coordination of the beneficiary families.
Samba Jawo, Alkalo of Rumba Village, thanked Jaha and the team for the gesture.