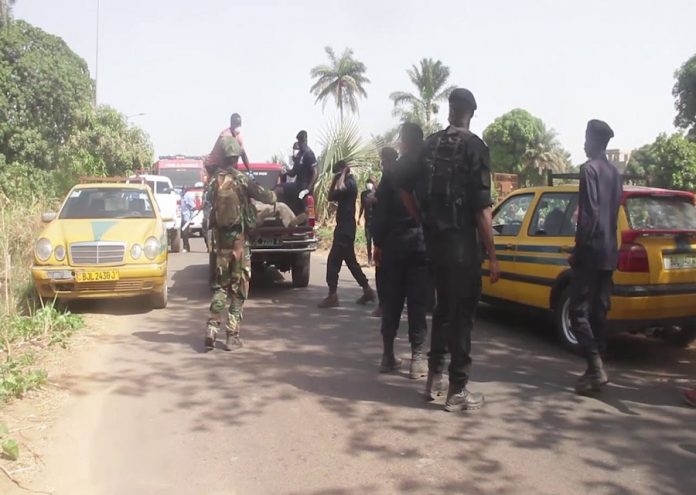 Police were called to a gruesome suspected murder scene at the Bakau Women’s Garden Saturday where the body of a man was found with his throat slashed.
Women gardeners who knew the man identified him as Ousainou, a native of Casamance in Senegal.

The body was also found with several marks of suspected knife wounds on the stomach which women gardeners described as the handiwork of a gang.

The victim had been living in a hut in the gardens where he also operated a small but popular palm wine ghetto frequented by many locals.

Women gardeners who knew him cried as the body was being removed by the Fire and Rescue Services from the thick bush.

A woman gardener, who worked with Ousainou said the victim had recently been complaining about frequent stealing of his wine from tree tops. She added that Ousainou must have almost certainly been involved in a fight with one or more persons during the night, with his mysterious palm wine thieves, who might have overpowered him.
Ousainou’s body was first discovered by his twin brother.

Other women gardeners who spoke to The Standard said they were “seriously distraught” by the killing of a person they considered “polite and friendly”.

“He was kind and sociable,” one woman told The Standard yesterday.
The new Crime Management Coordinator, Ensa Badjie, and men and women of other security agencies, visited the crime scene.

As the women farmers struggle to come to terms with the brutal and cold-blooded killing of Ousainou, they are calling on authorities to investigate and swiftly brought his killers to justice.
The police were unreachable for details.