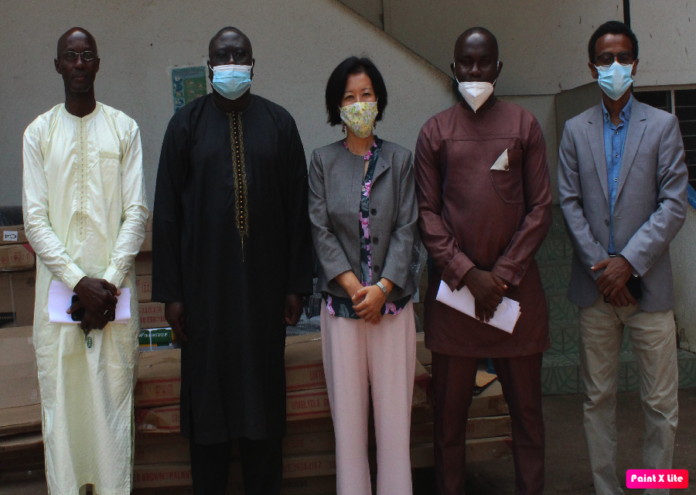 The Ministry of Foreign Affairs, International Cooperation and Gambians Abroad (MOFA) on Friday received office equipment from the International Organisation for Migration (IOM) at the request of the Diaspora Affairs Division of the Ministry. The equipment were received by the Permanent Secretary, Mr. Sulayman Omar Njie, for onward delivery to the Diaspora Affairs Division.

Receiving the items on behalf of the Ministry of Foreign Affairs, Permanent Secretary Sulayman Omar Njie, thanked IOM for the gesture and assured that the equipment would greatly enhance work at the Division, the Ministry and by extension the Government.

He said the donation was timely as the Ministry planned to move to its new complex situated at the entrance of Banjul. He further disclosed that considerations are at an advanced stage of recruiting new staff with a view to surging the capacity and value addition of the Diaspora Division.

Commenting on diaspora engagement, PS Njie posited that the Ministry is working on ways of tapping the diaspora potential especially those in the international system and those with specialised skills relevant to the work of the Ministry. He recalled that since the establishment of the Diaspora Division in 2017, the Division has been working on ensuring that returned migrants are settled and capacitised to be able to make a dignified livelihood in the country.

Speaking on behalf of International Organisation for Migration (IOM), Fumiko Nagano, IOM Gambia’s Chief of Mission, expressed delight at the donation, adding that the Ministry could always count on IOM’s support at all times.

For his part, the Director of Diaspora Affairs Division, Dr. Abubacarr Jah, reminisced that in an attempt to build the capacity of his Division, they decided to officially contact the IOM office for assistance and responded in the affirmative. He used the opportunity to commend IOM for the assistance and for also supporting projects earlier initiated by his Division.

The brief ceremony held on MOFA grounds was also graced by a couple of staff of the Ministry.

Issued by the Communication Unit of the Ministry of Foreign Affairs, International Cooperation and Gambians Aboard.