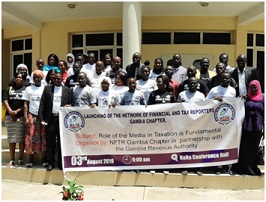 A section of Gambian journalists recently gathered to launch Network of Financial and Tax Reporters (NFTR).

The network was launched with the objectives to collaborating with financial institutions and tax authorities to sensitise the general public on their mandate and need to pay tax.

It will also work to promote fiscal transparency and accountability among government and private operators in the economy.

The president of the network, Abdoulie Nyokeh, said the idea of forming the network emanated from a media engagement and training organised by the African Tax Administration forum secretariat in Kigali, Rwanda last March.

“For the media to play its effective and efficient role in educating and sensitising the masses on tax laws, there is a need for close collaboration between the tax authority and the media.

These two bodies have a critical role to play in this process,” he said.

He expressed the organisation’s readiness to meet its objectives in enlightening the society about the importance of tax-paying.

The Standard editor Lamin Cham said: “It is important that journalists know something about everything…. Building the capacity of journalists is a fundamental undertaking that would help them to effectively report on issues of national interest.”

Deputising the GRA boss, Ousman Bah, said his institution was proud to be associated with the network.

“The formation of this network is in line with on-going GRA strategy to engage, educate and sensitise the general public, including key stakeholders involved in the implementation of its mandate,” Bah said.

“As a revenue administration, we will continue to value and appreciate the partnership with the Network of Financial and Tax reporters,” he said.