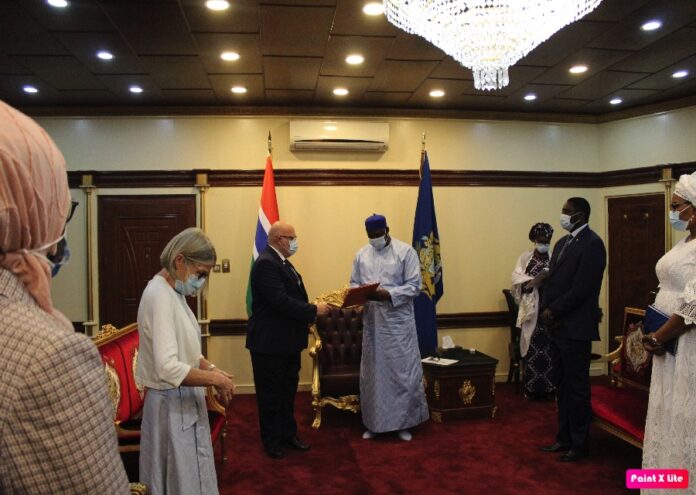 Banjul: 30th September 2020: The new High Commissioner of the United Kingdom to The Gambia, H.E. David Belgrove – OBE, on Tuesday 30th September 2020 stated his resolve to deepen the already cordial bilateral relations that exist between the two countries.

High Commissioner Belgrove said the UK would work with The Gambia to build on the on-going reforms process in the areas of democracy, human rights, security sector reform, health and education. He used the opportunity to congratulate the President, H.E. Adama Barrow, on the democratic reforms The Gambia has made to date.

High Commissioner Belgrove made these remarks to the State House’s press corps after presenting his Letters of Credence to President Barrow. He was accompanied to the State House by the Minister of Foreign Affairs, International Cooperation and Gambians Abroad, Dr. Mamadou Tangara.

He added that the UK would help in Gambia’s economic recovery efforts particularly after the Covid – 19 pandemic ended. The High Commissioner pledged to work on investment cooperation as well as strengthen defence relationship for more training and mentoring for The Gambia Armed Forces.

He praised the excellent relations existing between The Gambia and the United Kingdom noting that the relations have a long history of friendship.

Issued by the Communication Unit of the Ministry of Foreign Affairs, Inte