Of men and rape: Medusa redux 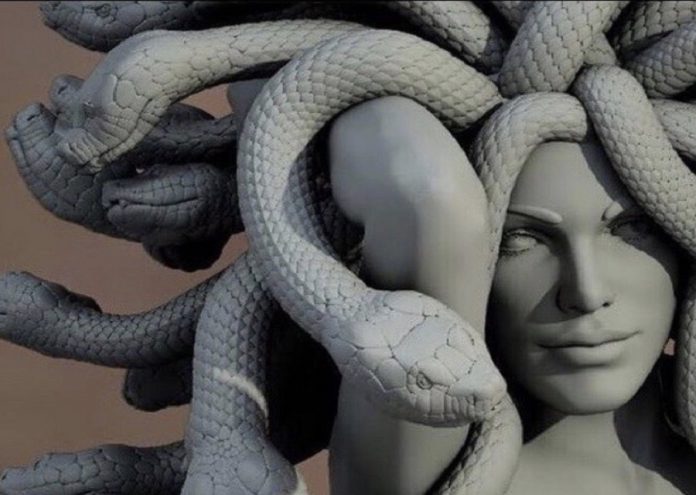 A few days ago, a friend who lives afar sent me a rather simple question: Are you all right? I was supposed to say yes. And I said yes. Her concern emanated from a dream in which she witnessed my burial. Talib, wrapped in a shroud, legs and hands tied like a Tobaski ram, and his lifeless body rhythmically lowered into darkness. No bed needed or blanket. It was now mother earth spread six feet down and half that wide. Then sand was pushed back on me. The shroud. The ropes. The flesh and the bones all slowly eaten away by maggots. Insects that I could crush without knowing even if I just roll over in the grave now all over my body sucking the remaining valuable things in me. The sand filled my ears and nose. The eyes couldn’t open either. The hole got tighter and stuffier. I then woke up, brain activities back to normal but realised that I’m actually dead. Oops! A spectacle of long beards, big haftans and admirers thronged my home. The usual pretentious show of sympathy would then take place. Photos of me all over social media. Some would even share screenshots of our private conversations. The Gambia mourned another young soul.

Now back to reality, thinking about all that makes me wish I’d be the last person to die. I wouldn’t want to be victim to Gambians’ theatre sympathy. The message came amid numerous sudden deaths. From Abdou to Ismaila, two brilliant young people quietly snatched away by the cold hands of death. But then while I scrolled down Twitter, I stumbled on a disturbing image which had gone viral. A three-month-old baby was raped in a country I don’t even want to remember. Actually, I want to remember: Federal Republic of Rape. It was the coldest thing to do. She is three freaking months old. Ninety freaking days old. But it all just shows the insanity of men. If men have the chance, they would rape babies in the womb. The comments that followed the images were all too familiar and as equally disgusting: He is mentally unstable. I don’t believe the story. The parents just made it up to make men appear terrible (as if men haven’t been terrible from the start). He cannot rape her even if he tried (as if your d*** has to go in for it be considered rape).

Where was her mother (I curse anyone who even thinks about this question)?Why was the door open (even prison doors are sometimes open)? I got tired of reading the comments. It was difficult to stomach. The baby had to go under three surgeries. The sight of the image. The bulging intestines. The depleted genitalia. She cannot excrete. If she survives this excruciating pain, she would live the rest of her life stigmatised. Her whole life was taken away even before it started just because a warm blooded man decided to be coldblooded.
The defence has always been that not all men are bad. Yes, but there are enough men in the world to make it feel like a jungle for women. At least three billion men. Even if a quarter of that is rotten, it is bad enough. That’s not even the problem. No, the fact that cruel men are too many is not the problem. The real problem is men always find a way to make sense of our own bestiality: Her skirt was hitched. Her thighs were displayed. Her cleavage was out. Her boobs were seen. She wore a see-through. She didn’t wear bras. Her boobs dangled. Dude, if each time your d*** is hard you want to fuck, you’re an animal.Only animals do that. That’s why we see a jack chases and forces itself on a jenny or even a cockerel chasing a hen and does the same. Ask the jack or the cockerel why they did it and they wouldn’t say because the jenny or the hen was naked. I’m sure the idiot who raped the three months old would say the baby was naked. Smdh.

Oluwatoyin Salau, 19, suffered sexual abuse her entire life. And she still got raped and murdered by a black man in Florida, after going to a BLM protest. Toyin, as she was jovially called with her slithering locks, was turned into a villain. She was victimised. She was raped. She was murdered. And yet, her spirit cannot rest because she’s been turned into a villain with the same questions peddled around. That’s not new, is it? Since the beginning of Greek civilisation when myths were forged in fire and stone, Medusa, the snake-haired Gorgon has been a sexualised symbol of women’s rage. In the words of an artist, she was depicted as particularly ugly, with a protruding tongue, boar tusks, puffy cheeks, her eyeballs staring fixedly on the viewer and the snakes twisting all around her. But like almost all stories that contain women as the actual heroes, Medusa’s own was twisted as well just to maintain, as ever but rather fictitiously, that women are and have always been insignificant components of history. Her face – whether fierce and grotesque or feminine and composed – was originally a ravishingly beautiful maiden who was apparently raped by a god, Poseidon. Let me make it louder: A god! Imagine a god being a rapist.

The venerated chief deity at Pylos and Thebes-equivalent to the Roman Neptune-raped her in the sacred temple of Athena. Furious at the desecration of her temple, Athena-instead of cursing the god himself for raping an innocent maiden—transformed Medusa into a monster with the deadly capacity to turn whoever looked upon her face to stone. It’s through this male-centered hero narrative that Medusa became shorthand for monstrosity. The story of a powerful woman raped, demonised, then slain by a patriarchal society. It seems less of an ancient myth than a modern reality. You see, men don’t think their gods, their pastors, their imams, their teachers, their fathers, their brothers, their cousins, their uncles, their nephews have the heart to rape or violate women. That’s how men are built to think; that is a building that needs to be knocked down.You felt threatened by Medusa’s striking beauty. You murdered her. And then you used the Gorgoneion, literally her head, asa special apotropaic amulet for protection. How terribly ironic! Tell me that makes sense and I will put a bounty on your big sinful head.

For days I couldn’t shake off the feeling of the innocent baby. It was deep. It got deeper as I recollected how it must have felt lying next to my twin sister in the womb. Innocent and oblivious of the dangers she was coming into. The world that was conveniently made for her to fail. To suffer. To bleed. To feel less. To be objectified. To be sexualised. To be violated. To be raped. To be defiled. To be assaulted.To be groped. To be murdered. That is me trying to feel like the twin brother of the baby raped. I couldn’t however put myself in the mother’s shoes. The mother who woke up from a short siesta only to find her lovely baby destroyed in the most heartless way. That’s too big for me. But I swear on the purities of my ancestors—who crossed oceans and deserts from Arabia to Africa—if you hand me that rapist, I will fry his genitals, put it in tapalapa and eat it with my cup of tea.