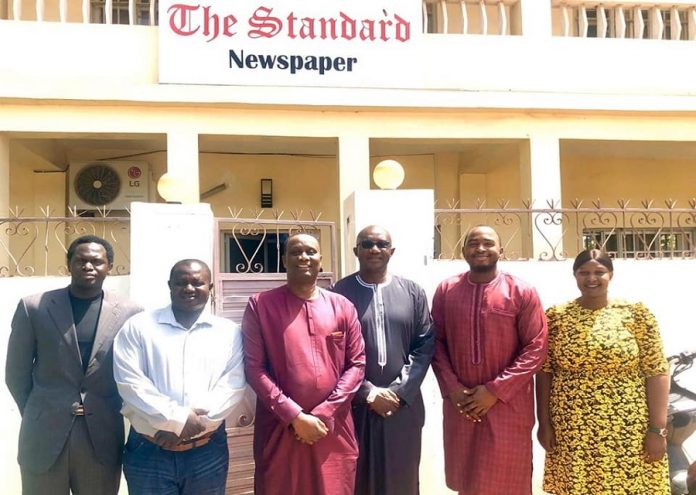 The deputy executive secretary of the Organisation of Islamic Cooperation,(OIC) Gambia Secretariat, Essa Bokar Sey, the secretariat’s head of branding and communication, Nfally Fadera and communications assistant Ndey Kumba Demba recently made a courtesy call on the management of The Standard newspaper.

During the visit, discussions centred on areas of mutual interest and collaboration between the body coordinating preparations ahead of the OIC summit in 2022 and the Bakau-based media company.

During talks, Mr Sey praised the management and staff of The Standard for their “reputable contribution and efforts towards complementing the ongoing outreach activities of the Secretariat in the public light”.

He went on to state the importance of media in any society, adding that the Gambian media form part of the secretariat’s priority agenda for a successful summit which would not only upgrade the infrastructure of the country but also place it as a leading destination for future international conferences.

“Most of the priority projects including the renovation of a VVIP lounge at the Banjul International Airport, construction of a 50 and 22 km feeder roads, and the upgrading, transmission and distribution of water and electricity through Nawec all received funding and works are to begin in earnest.

Nfally Fadera stated that the media engagement forms part of the secretariat’s new strategy anchored on enabling capacity development initiatives and supporting the media industry to increase its effectiveness in providing efficient coverage for the summit.
The former broadcaster, Mr Fadera called on Gambians to take ownership of the OIC, adding that the secretariat remains committed to delivering on its mandate as it rollout programmes that will enhance structural transformation and people-centred development in the country.

The managing director of the Standard Company, Sheriff Bojang, general manager, Pa Sallah Jeng and editor-in-chief of The Standard newspaper, Lamin Cham, assured the secretariat of The Standard’s support and guidance when required, to make the work of the Secretariat a success.