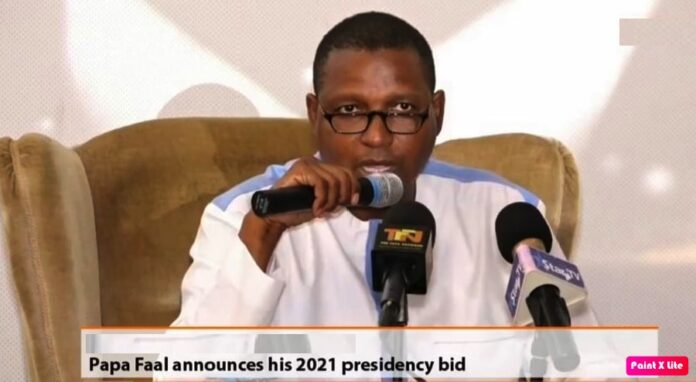 Papa Faal, a former U.S soldier and grandson of first president Jawara, who last week declared his intention to for president next year, said he has no regret over his involvement in the 30th December 2014 armed attack on the presidency.

Faal took part in a military operation in December 2014 aimed at overthrowing then president Jammeh. The group attacked State House, Faal escaped but some members of his group were killed.

Speaking in an interview with The Standard Tuesday afternoon at his office in Brusubi, Mr Faal said he only regretted the loss of lives in the incident but not his participation in the abortive operation.

“If we have to do it over again, we probably might have to plan it better. [But] we will not do it again, let me make that clear. I have no regrets. I did it for my country,” he said.

However, in his memoir, Sweat is Invisible in the Rain, Cherno Njie, the presumed leader and financer of the coup, accused Mr Faal of leaking all their secrets upon his arrest by American federal agents.

Responding to these allegations, Mr Faal said: “Listen carefully, If I lost people in an operation and I go out there and tell them [the Americans] that I am not involved, I will be betraying the people who died. So, in response to him saying that I leaked all to the Americans, I am saying I had to go down there [in America] and tell them that we lost people. Those people we lost, their families are in the U.S. and they need to be contacted.  Therefore, it is my duty to let the world know what had happened. At that time, Yahya Jammeh was calling them terrorists. What kind of a person would I be, if I have to go to the U.S and sit down and drink coffee and tell people that I wasn’t involved? That’s not who I am. Maybe that’s who he was because he denied that he was involved [in the coup].”

Read more of the interview where he also discussed his prospects at next year’s polls, and corruption in the country on Bantaba tomorrow.