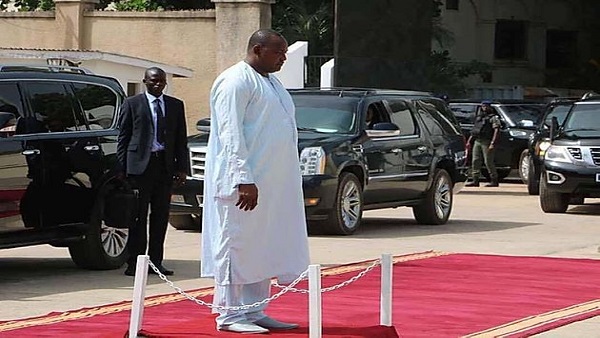 Take it for granted or consider it as a very special case of criminality and low expectations, our revolution, country, and government are hijacked by ‘incompetently incompetent’ thugs. Believe it or not, our president by design or by default is refusing to lead. What standard did our government and president use to justify having uneducated, unsophisticated loud mouths like Henry Gomez, Siaka Jatta and Dou Sanno as government and presidential advisers? What threshold and qualifications did they have to meet before they were hired as presidential advisers? Or is it a matter of political compensation with our taxpayers’ money and lives?

As I began to write this paragraph, I felt warm tears dropping on the keyboard of my computer. I was crying. Really, I was crying not for myself but for my people trapped under an incompetent and insensitive leadership in the Gangster Republic of The Gambia under Barrow. The thought of the betrayal of the sacrifices of our forebears, revolutionaries that went to prison and lost their lives in the fight for better Gambia. For now, it is safe to say they died for nothing until we get our country and government back in good hands. It is the height and biggest insult to our common struggle for Barrow to choose to surround himself with people like Henry Gomez, Seedy Njie, Siaka Jatta and their ilk.

Any country that has incompetent, brainless political hacks like Dou Sanno, Siaka Jatta and Henry Gomez as government and presidential advisers is royally screwed. The words ‘competence’, ‘qualifications’, and ‘leadership’ have been bastardised in New Gambia. Incompetent men are appointed to run ministries they have no competence to run. Just recently, I have had to make a post on Facebook to ask my Gambian friends who the current Gambia minister of youths and sports is. Since the former minister of youths and sports Henry Gomez was booted out in a cabinet reshuffle, his successor has been eerily and disturbingly quiet. Very worrying for a minister of youth and sports who has not come up with any noteworthy initiatives for the youths and sports in our country. If he has, he has not been seen and heard to be doing so.

Former American president, George W Bush described it as the soft bigotry of low expectations that has been bedeviling most of our citizens in Third World countries. It shocks and saddens me to see the Gambian minister of health trending on Facebook because he declined to be part of the pilfering of Covid-19 response funds. Incorruptibility and proactive leadership is expected of leaders and holders of any public office. With all due respect, he should not be celebrated for being what he should be and doing what he should do as a minister. He owes us loyalty, competence, incorruptibility, and respect.
Ask an average Gambian in any village why they support the incumbent president.

Their answer is hundred percent sure and likely to be because they have a relative in the cabinet or because the current government brought electricity and pipe borne water to their villages. These are not privileges accorded to them but their rights. Few days ago, I received US$1,200 from the American government under Donald Trump. I got this not because I voted for him but because he owes me this responsibility of care as my head of government and state in these trying times for everyone in the world.

Right this minute, poor Gambians are going hungry because our president does not care. The Gambians that are not going hungry are fed thanks to the generosity of private Gambian citizens that are marshalling resources on and offline to feed their fellow but poor Gambians. Gambians need to stand up and protest for their rights. Gambians need to stand up and protest for their government to use their tax monies judiciously to hire the qualified advisers and minsters to guide the running of our government. It is our government and our president. We voted for our president and government. We pay for our government to be run with our taxes, bilateral grants sought and given in our name and loans even our predecessors would still have to pay long after we are all dead.

Alhassan Darboe is a Gambian Communication scholar, consultant, and Real Estate businessman. He writes from his base in USA. He is currently a graduate student at Arizona State University’s Hugh Down School of Human Communication.