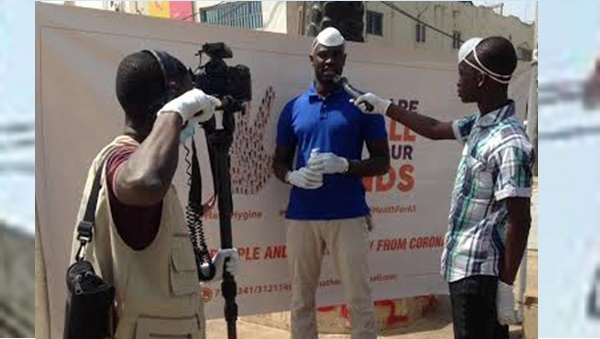 Members of Pipeline Youth Association, (PYA) last Thursday held a day-long public sensitisation campaign on preventive measures of the deadly Coronavirus (Covid-19).
It was held at West Field Monument, and hand sanitisers including gloves and stickers were handed to drivers and people of the area.
Speaking, Momodou Kambai, president of PYA, highlighted the significance of the sensitisation.

“This disease is a global crisis, people are suffering and dying every single day due to it, but it seems like people in Africa here, particularly in The Gambia don’t understand much about the virus. That’s why people are not taking it seriously,” he stated.

Mr Kambai said Thursday’s sensitization will help raise awareness on the virus.
He called on all to support government’s efforts to curbing the outbreak in the country.
He cited previous similar events organized in Latrikunda and Pipeline as success.
QTV reporter Alieu Ceesay, was among the speakers, and called on the public to be resolute in their resolve.

“There is a need for people to be enlightened to know the impacts of this deadly disease and to know how to prevent themselves.”
Other speakers were businessman Buba Ceesay, who asked people to “pray to God because prayer is the only thing that can save us from this virus”.