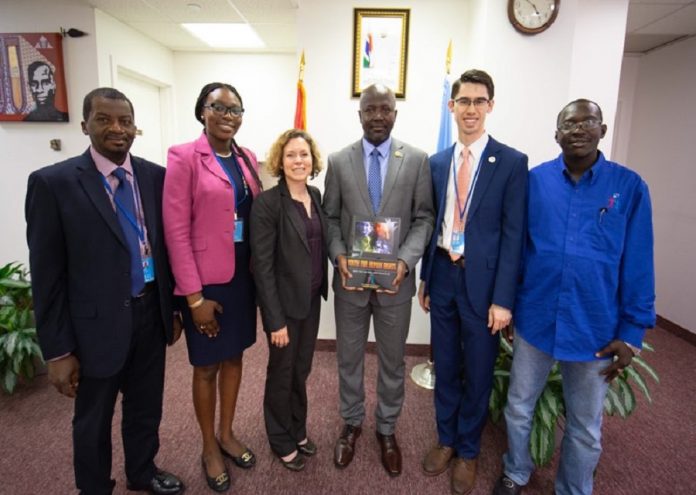 By Omar Wally in New York

The Gambia and the US have shared years of long standing ties which also includes people-to-people exchanges being facilitated by either the governments of the two countries or civil society organizations.

In their quest to further boost the relations between the two countries, Youth for Human Rights International (YHRI), a US-based non-profit organization and Beakanyang Kafo of The Gambia last week reaffirmed their resolve to boosting cultural ties between Banjul and Washington.

The heads of the two organizations had a bilateral meeting on the sidelines of the 16th International Human Rights Summit at the United Nations Headquarters in New York, USA.

The Executive Director of Youth for Human Rights International Mr.Ruslan Khusainov applauded Beakanyang for its contribution towards strengthening democracy in the Gambia for over a decade.

He assured the organization of his commitment to continue working with them to promote human rights education in the country and to help strengthen the relationship between the two countries.

“We are happy that The Gambia for the first time is a co-sponsor of this year’s summit and we hope that your country will support the next year’s summit as well,” he noted.

Mr Khusainov reaffirmed his commitment to continue supporting in the realization of building human rights culture in the Gambia.

“Youth for Human Rights is pleased to have Beakanyang in The Gambia doing awesome work across various regions of the country,” he added.

For his part, Nfamara Jawneh, Executive Director of Beakanyang thanked YHRI for inviting the Gambia to the high level convergence.

He also commended YHRI global director for the audience which he said is a clear manifestation of how much the organization values its partnership work in The Gambia.

“I’m happy that in this new partnership we will be able to have cultural exchanges as well as exchange of speakers and experts plus our existing support programs,” he said.

Mr Jawneh said with such partnership Gambians especially youth would have the opportunity to learn more about human rights and good governance from would be visiting renowned US experts.

He concluded by saying that it would be important for international organizations and developed countries to continue providing more support to The Gambia to sustain its democracy.

Meanwhile, in a separate engagement YHRI officials led by Beakanyang director also met with the Gambia’s Ambassador at the United Nations.

He cited the TRRC and National Human Rights Commission as clear examples of government’s commitment towards protecting human rights.

He said that the country being the host to African Commission on Human and Peoples Rights used to be well known and respected for protecting human rights and that is exactly what the new government is bringing back.

“I have been following the good work of Beakanyang back home and I’m very much impressed with their work,” he remarked.

Gambia’s chief UN diplomat also called for more investment in country’s young people by the US base organization to help in the realization of some of their economic rights.