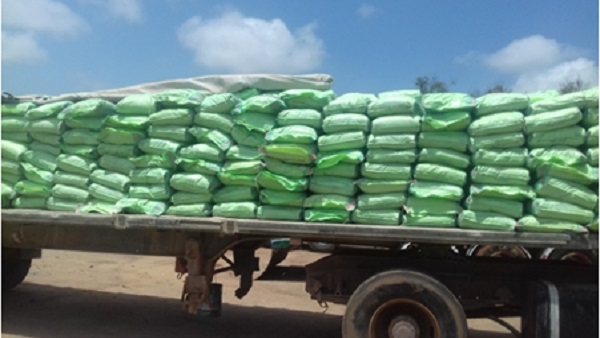 The Government of The Gambia on Tuesday distributed 6000 bags of fertiliser and 1000 bags of groundnut seed nuts to farmers across the country.

Farmers would get each fertiliser bag for a discounted price of D700 while the groundnut seed nuts would be loaned to under privileged farmers who will pay in kind at the end of the cropping season, officials say.

The initiative is part of a food security project funded by Japan to support underprivileged farmers.

The KR2 project worth D106,000,000 aims to provide fertiliser to improve productivity and to support agricultural production.

Speaking at the handing over ceremony in Banjulinding Aba G Sankareh, the Director of Agri business services under the Ministry of Agriculture, said each region would receive 900 bags of NPK fertiliser and the others to receive 200, 120 and 40 bags of groundnut seeds.

The agri business unit according to the Director would be responsible for the overall monitoring of the project in collaboration with MOA and other partners.

“This is to support the Gambian farmers to get access to fertilizer at an affordable price in order to boost Agricultural productivity”
“The fertilisers will be monetised and proceeds deposited in KR2 account at the Central Bank as with previous projects,” Sankareh added.

He explained that there would be collaterals attached to ensure the effective sale of the products in case of any defaults.