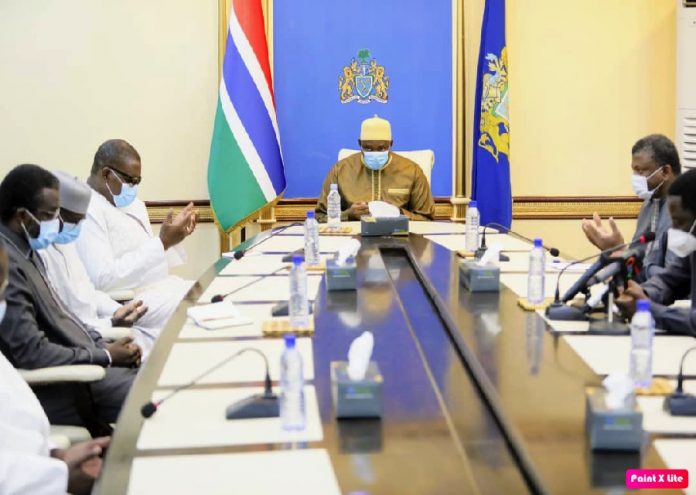 State House, Banjul, 22nd August, 2020 — President Adama Barrow said as leaders they are responsible and accountable to the people, thus urged the health professionals to take the lead to provide expert advice that will guidethem as politicians to make informed policy decisions on the COVID -19 response mechanisms. The Gambian leader made the remarks when he received a high powered Senegalese delegation dispatched to Banjul by President Macky Sall, at State House, on Saturday. He visit came as a result of the decision of the two Heads of State to facilitate for the Health Experts of the two countries to share experiences as well as for the Senegalese to consult on possible partnership and support to the COVID -19 response in The Gambia.

President Barrow said there are valuable lessons to learn about the Coronavirus situation from each country. “COVID-19 has overwhelmed us as a population; infection numbers are surging beyond our expectations and within a short period of time. Hence turned to my brother, President Macky Sall, to tap from Senegal’s experience in managing the pandemic,” the Gambian leader asserted. The Senegalese Director of Health Emergency Operations, Dr. AbdoulayeBusso, who spoke to the press corps after the audience described Gambian laboratories as “very good capacity laboratories” at MRC and National Health Laboratory under Department of Public Health.

They visited these labs and other treatment centres to exchange ideas and hold discussions with their Banjul counterparts on how to effectively collaborate and coordinate their efforts between Banjul and Dakar.

President Barrow expressed delight at the quick response from his Senegalese counterpart, President Macky Sall in dispatching such a team without much formalities, which he said, raised his confidence in their brotherhood as two nations but one people.

The President described the gesture as representing “true bond of bilateral friendship’ never before enjoyed by Banjul and Dakar. Furthermore, he said, their friendly relationship also presents an opportunity for the two governments to work together for the eternal benefits of their two peoples.

“Such a dream cannot be achieved by any two leaders without the full participation of the two populations,” President Barrow added. Senegal’s COVID-19 Response Coordinator, Prof. Moussa Seydi, the Director of Health Emergency Operations, Dr. Abdoulaye Busso; the General Administrator of Institut Pasteur of Dakar, Dr. Amadou Alpha Sall, are among other high profile experts on the Coronavirus Pandemic led to the State House by the Senegalese Ambassador to The Gambia, Bachirou Sene.