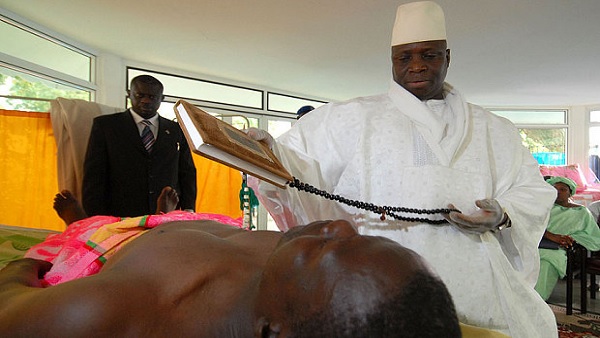 (Read the letters here.) The survivors are supported in their actions by AIDS-Free World, the Gambia-based Institute for Human Rights and Development in Africa (IHRDA), and Combeh Gaye of the Gambian law firm Antouman A.B. Gaye & Co.

“It is important that Jammeh and his collaborators be brought to account,” said Paula Donovan, Co-Director of AIDS-Free World.

“We are engaged in these actions to highlight the silence and complicity of the international community.

The world knew exactly what Jammeh and his doctors were doing.

Jammeh would regularly boast to the world’s media about his bogus cure.

Yet institutions and governments fell silent while people suffered and died. We must ensure that this never happens again.”

“When medical doctors engage in professional misconduct, as these doctors did in lending credibility and prestige to Jammeh’s ‘cure,’ they should be subject to severe penalties,” said Oludayo Fagbemi, Legal Officer with IHRDA. “The Council has a responsibility to send a signal to the medical profession that such gross disregard for human rights will not be tolerated.”

In 2007, Yahya Jammeh declared that he could cure AIDS with a secret herbal concoction. He conscripted Gambians living with HIV and AIDS into his Presidential Alternative Treatment Programme and ordered them to cease taking anti-retroviral drugs. With the assistance of Drs. Mbowe and Njie, Jammeh had his “patients” drink herbal concoctions that often made them violently ill. He also slathered his concoctions on the patients’ partially nude bodies while chanting prayers.

Select sessions were broadcast on Gambian television without the consent of the victims, some of whom hadn’t yet informed friends or family of their HIV status.

Patient autonomy and informed consent were ignored, with patients feeling they could not decline or question treatment procedures. Armed guards were ever present.

The programme ran until 2016, when Jammeh lost a national election. After initially contesting the results of the election, Jammeh fled the country in January 2017. He now lives in exile in Equatorial Guinea.

“While international institutions were issuing mild, empty, diplomatically worded statements, Jammeh and his government were endangering the health and violating the human rights of Gambians living with HIV and AIDS,” said Sarah Bosha, AIDS-Free World’s Legal Advisor, HIV and Human Rights. “I am proud to stand alongside Fatou, Ousman, and Lamin as they courageously take action on behalf of all those who suffered under Jammeh and his doctors.”

According to the three survivors’ complaint against Dr. Mbowe, he had “long-term, constant and engaged participation in all aspects of patient care and performed duties in pursuit of the Programme’s objective of claiming to have an effective cure for HIV.” Dr. Mbowe and other programme officials “authoritatively asserted to us and publicly announced to the Gambian people that we had been cured of HIV, when, in fact, this was not true,” the complainants said.

Jatta’s complaint against Dr. Njie states that he gave “verbal assurances to us of the efficacy and safety of Jammeh’s HIV cure, telling us that we could be cured of HIV within a short space of time.” He “advised us in his professional capacity to immediately stop taking our anti-retroviral therapy (ART) and exclusively take only Jammeh’s cure.”

“Dr. Mbowe and Dr. Njie willingly participated in Jammeh’s destructive delusion,” said Saramba Kandeh, Legal and Gender Advisor for AIDS-Free World. “They did not resign, raise a protest, or attempt to flee the country. And they have been allowed to continue to practice medicine.”

In May 2018, Jatta, Sowe, and Ceesay filed a lawsuit against Jammeh in the High Court of The Gambia, seeking financial damages for harm suffered and a declaration from the High Court that their human rights were violated. That case also was filed with the support of AIDS-Free World and IHRDA, with Gaye representing the claimants.

The legal team is now arranging for Jammeh to be served with papers in his exile in Equatorial Guinea.