The fight against Rahma should scare all Gambian investors, and here’s why! 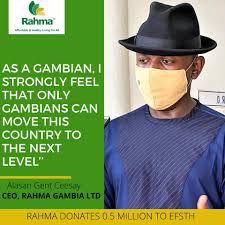 By Sainey Darboe, US

The details around the reported business breakdown between Rahma and the existing non-Gambian cartel of the food and commodities business are still very sketchy, and as a result I may not be able to authoritatively comment on the facts of the matter. However, one doesn’t have to look too close to gauge the control the deeply entrenched and empowered drug-pushing, price hiking foreign mafia have over the Gambian economy.

To the extent that the Indian Cabal can orchestrate the arrest of a Gambian citizen, with the help of their Gambian henchmen in broad day light is chilling and should make every trailblazing Gambian entrepreneur and investor scared. It is a vivid reminder that, as a Gambian businessman, there is only so far you can go, and no way will you be allowed to rattle the cage of some sacred cows. No matter how much ambition, connection, determination, innovation, or money you may have, there are certain sectors, mark you, the crucial sectors of the economy that are out of bounds for Gambian citizens.

You know how bad it is? The all-powerful criminal cabal refused to reduce the prices of rice and other essential food commodities even after the president of the Republic called them for a dialogue, following the government’s waiver of all duties and taxes on all basic food commodities in the country. There is zero duties on rice and essential goods now but the Indian and Lebanese mafia that control the rice importation sector told the government that they will not reduce prices at the detriment of poor, ordinary Gambians who cannot go without their staple food.

What’s On Gambia recently published a list showing the extent to which foreigners have taken charge of all the crucial sectors of the economy. As a keen observer of the Gambian economy and society, I was shocked! But as a Gambian who cares deeply about my country, I wept tears of desolation and despair. I could not help but wonder why we have so few Gambian players manning important sectors of our economy. But the answer became obvious in the Rahma furor this week: large scale Gambian involvement and domination at the highest level will threaten the selfish interests of the foreign cabal. We have been down this road before.

The ordeal of Alasan Ceesay is all too familiar. It is almost like a déjà vu. In the early 1970s, a brave and dynamic Gambian businessman called Matar Sarr, who established ‘the first really independent Gambian business house’, following years of foreign (large Lebanese) domination of the post-independence era business and commerce, was eliminated through constant harassment and unending bogus court charges. According to the article, the Madi’s, Matarr’s biggest Lebanese business rivals, were able to cook up false charges against him with the blessings and support of the Gambian Attorney General and Inspector General of Police. He was eventually literally gunned down with machine guns in the suburbs of Fajara. His only crime was to establish a truly successful Gambian business that owned ‘a fleet of river vessels, an insurance company, and international shipping agency’.

See the full sad and heart-wrenching story of Matarr on the Standard newspaper website; google-search: Matarr Sarr: The Murder that shook Gambia.

It is the Great Gambian Betrayal! Just like Rahma, Matarr’s downfall was orchestrated by the Gambian ”top politicians, senior civil servants and police officers, businessmen, and all the ‘somebodies’ in The Gambia”. It will be catastrophically shortly-sighted to allow another Matarr Sarr-like scenario to go unchallenged. The Gambian political class, judiciary, civil service, clergy, security service, and citizens at large, must not allow it. If you are outraged by what happened in the 1970s, well you can do something to prevent a recurrence.

The only plausible motive of the Lebanese, Indian mafia and their Gambian collaborators leaking a purely civil matter in the conduct of commerce to the press is to blackmail a Gambian rising star and put the kibosh on his fast-growing business start-up. Why pursue and incarcerate the proprietor and leaking information to the media when there’s still room for engagement? The answer is not hard to fathom: they want to eliminate Rahma. Negotiations could have still succeeded if there is good faith. Tell me a businessman who does not owe creditors money and I will show you that he is a joke.

To conclude, based on what I have seen in the media in respect of Rahma Gambia Ltd, I will choose the Gambian company over these foreign cartels who care about nothing other than the bottom line. None of their profit spends a week in our country. Just a few weeks ago Rahma donated D0.5 million worth of vital office and medical equipment to the main referral hospital of the country. He is spending over D250, 000 renovating the house of a 90-year old lady and her disabled son in Jarra Soma following an online appeal for assistance.

And above all, the company is selling rice directly to the Gambian consumer at D1000, way cheaper than the existing competitors. The simplest thing that we can all do with immediate effect is to start buying only from Gambian owned businesses from today onwards wherever possible.  There are only a few of them and many of us so ask yourself, who really has the power to make or break a business, the supplier or the customer?

The revolution of Gambian empowerment and genuine independence has been long overdue and there is no time like the present. The truth of the matter is that we have a fight on our hands and we need to start the formation now.