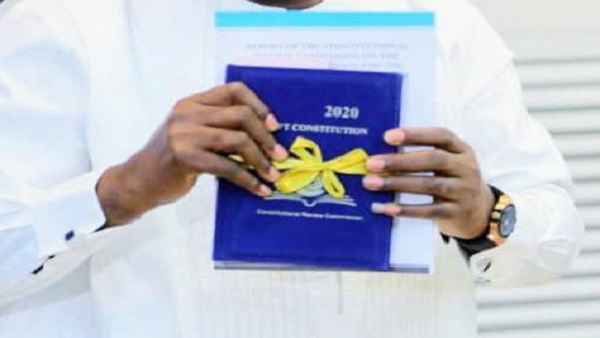 Finally, after two months in the hands of President Adama Barrow, the draft Constitution has now been gazetted and hopefully, the process of its enactment will proceed without any undue delay. There is a high probability that if the right procedures are followed to the letter, the draft would be submitted to a referendum not later than early in 2021.

However, there could be some possible snags on the way unless the various stakeholders and institutions carry out their mandate with commitment. For example, it is quite clear that the Independent Electoral Commission (IEC) must conduct voter registration before the referendum; otherwise, there is no way that the process could be credible. There is however, no visible sign that the IEC is making any efforts to initiate a voter registration process. Is there a deliberate attempt to thwart the enactment of the new Constitution either to delay the presidential election or ensure that they are held under the 1997 Constitution?

While the process of enactment of a new Constitution is proceeding, the draft is however still the subject of analysis and critique by Gambians from various strata of life. Generally however, apart from a few critics like Barrister Lamin J. Darbo, who accused the Constitutional Review Commission (CRC) of plagiarizing the Kenyan Constitution, and the Gambia Christian Council, who genuinely decried the failure of the draft to address their main concerns, most people seem to welcome it as a big improvement on the 1997 Constitution, which had been subjected to so much change that it was eventually transformed into former President Yahya Jammeh’s personal playbook, virtually doing whatever he wanted with it.

However, with the advent of the new Gambia, President Barrow would never to be allowed by the people to have that free hand to do whatever he wanted with it like his predecessor. This is a brand-new era in this country and Gambians will never again allow any leader to transform him/herself into a monster like former President Jammeh succeeded in doing.
We can all recall that prior to the referendum in 1996 that ushered in the 1997 Constitution, Yahya Jammeh and his Armed Forces Provisional Ruling Council (AFPRC) made several changes to the draft, including lowering the recommended minimum age-limit of 40 years for a presidential candidate to 30 years, no doubt to ensure that he would be qualified to contest. Subsequently, we also witnessed its frequent amendments including the removal of the second round of voting and the institution of an upper-age limit for a presidential candidate, apparently targeting members of the opposition like the leader of the United Democratic Party (UDP) Ousainu Darboe.

Of course, like all constitutions, there are bound to be sections and clauses that may not be agreeable to everyone. That is quite natural as we all have our different tastes and aspirations. For instance, many people, including the Christians and other minority groups would have been more comfortable if the word ‘Secular’ was included in it, especially recalling the unilateral declaration of the Gambia an Islamic Republic by former President Jammeh, virtually reducing them to second-class citizens. Even though the secularity of the state has been adequately addressed in various clauses of the draft, but it would have been much more re-assuring if the word ‘Secular’ was included. There was no justification for the CRC to fail to put it in the draft in the very first place. While we can understand them being overwhelmed by the strong opposition to the inclusion of the word by Islamists, giving it all sorts of nasty connotations, but there is no doubt that if they had initially maintained it in the original draft, hardly anyone would have given it a second thought. I would therefore tend to agree with Professor Abdoulaye Saine that “In excluding the term “secular,” they (CRC)may have consciously or unconsciously referenced their own worldviews, political/religious leanings, training, values and normative preferences/biases.”Maybe they were too scared of the “tyranny of the majority”, as Professor Saine succinctly put it.

In a similar vein, while we should commend the CRC for catering for the rights of women in Section 55. (1) “Women are accorded full and equal dignity of the person with men.
(2) Women have the right to equal treatment with men, including equal opportunities in political, economic and social activities.
(3) The State shall take measures, including affirmative action programmes, to ensure that women –
(a) access relevant education and training;
(b) have opportunities to associate, be represented and participate, in political, social, economic and other spheres of life;
(c) are protected from abuse and all forms of violence and exploitation, including protection against hazardous or exploitative labour;
and (d) access employment,”yet that right seems to have been taken away from them when it came to the composition of the Shari’ah High Court. While it is not specifically mentioned in the Establishment and Composition of the Shari’ah High Court in Section 187, but it is very unlikely that any of the judges of the Court would include a woman. Where then is the empowerment of women as reflected in Section 55?
Another provision in the draft Constitution that many people have expressed concern about is Section 45 (2) “The Speaker shall be elected by the members of the National Assembly from outside the National Assembly in accordance with the Standing Orders of the Assembly and shall be a person who –
(a) is a citizen by birth;
(b) is qualified to be elected as a member of the National Assembly;
(c) has proven experience in the public service, private sector or in academia;
(d) had not been nominated for election as a member of the National Assembly in the public election immediately preceding his or her election as Speaker;
and (e) is of high moral character and proven integrity.”

I feel selecting someone of “high moral character and proven integrity” from outside the National Assembly would be much better than picking someone from among the elected members. It is quite likely that most of the elected members would have been members of political parties with quite defined political biases and even if they are required to resign from their parties after being elected speaker, their political affiliation would still be quite obvious. Therefore, it makes quite a lot of sense to pick someone politically neutral from outside to steer the affairs of the National Assembly.

When it comes to the retroactive nature of the draft Constitution as regards the term limit of the President, in any normal situation, I would have agreed with Barrister Lamin J. Darbo and President Barrow’s staunch supporters, including members of the cabinet, that it is unfair for the CRC to state in Schedule 4 (5) of the Term of office of Incumbent President in the transitional and consequential provisions that “Notwithstanding anything contained in this Constitution or any other law or any rule of interpretation or rule of construction, the term of office of the person holding the Office of President as at the effective date shall be construed to include the existing term and the person may contest election for the Presidency for only one more term as provided in this Constitution after the expiry of the existing term.”However, we are not in a normal situation but in a transition and therefore, President Barrow and his supporters should have been contented with serving a maximum of two terms rather than clamouring for more. In fact, he should even be grateful to Gambians for allowing him to renege on his campaign promise to step down at the end of three years as per his agreement with his coalition partners.